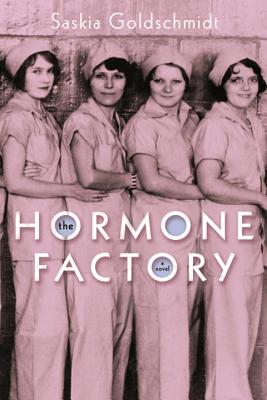 Mordechai de Paauw was the Dutch cofounder and CEO of the first pharmaceutical company to invent the contraceptive pill and hormonal treatments. Hitler's invasion of Holland and the threat he poses to the survival of De Paauw's family and the Jewish scientists working for him doesn't affect De Paauw's urge to test his treatments on his female workers and exploit them sexually. Even after the war, which he survives unscathed, De Paauw will continue his mischief until a catastrophe that he himself couldn't have imagined allows him to come to his senses long enough to tell us his story.
The Hormone Factory weaves questions of scientific integrity, sibling rivalry, and sex into a narrative that is as troubling as it is thought provoking.

Saskia Goldschmidt was born in 1954 in The Netherlands. A drama teacher and children's theater director for 25 years, THE HORMONE FACTORY is her first novel. She lives in Amsterdam. Hester Velmans is a novelist, editor, and translator of French and Dutch literary fiction. Born in The Netherlands, she grew up in Switzerland and earned a BA in English and a Master's in Literature from London University (King's). Her translation of Lulu Wang's The Lily Theater was a NY Times Notable Book of the Year, and she was awarded the Vondel Prize for Translation for her rendition of Renate Dorrestein's A Heart of Stone. She lives in Massachusetts. The author lives in Amsterdam, The Netherlands.

Praise For The Hormone Factory…

"A story written with color and momentum." --de Volkskrant

"A beautiful novel about the proud tyrant De Pauw, that is based on imagination, but probably contains a lot more truth than we would like." --Brabants Dagblad