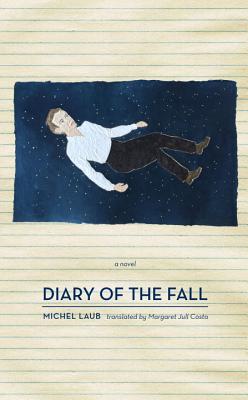 Diary of the Fall

“This novel is an emotional hand grenade, one of the most devastating and powerful works I've read in some time. As Laub's narrator traces his own downfall and delves into the trauma that ripples through his family history, I found myself propelled forward and backward with him, unable to resist this small novel's terrible gravity or the narrator's powerful honesty. Diary of the Fall is one of those rare books that doesn't just hold your attention, it demands it. I simply couldn't stop reading.”
— Tom Flynn, 57th Street Books, Chicago, IL
View the List

From one ofGranta's Best Young Brazilian Novelists, a literary masterpiece that will break your heart

At the narrator's elite Jewish school in a posh suburb of Porte Alegre, a cruel prank leaves the only Catholic student there terribly injured. Years later, he relives the episode as he examines the mistakes of his past and struggles for forgiveness. His father, who has Alzheimer's, obsessively records every memory that comes to mind, and his grandfather, who survived Auschwitz, fills notebook after notebook with the false memories of someone desperate to forget.
This powerful novel centered on guilt and the complicated legacy of history asks provocative questions about what it means to be Jewish in the twenty-first century.


Praise For Diary of the Fall…

“Michel Laub has constructed a painful, relentless and ultimately beautiful portrait of three generations, whose stories, told in parallel, culminate in the most innocent and surprising expression of love. A rewarding and excellent read.” —Martin Fletcher, author of Walking Israel, winner of the National Jewish Book Award

Michel Laub was born in Porto Alegre and currently lives in Sao Paulo. He is a writer, journalist, and the author of five novels. DIARY OF THE FALL is his first to be published in English, and has won the Brasilia Award and the Bravo!/Bradesco Prize. Michel was named one of Granta's twenty Best Young Brazilian Novelists in 2012. Margaret Jull Costa has been a literary translator for over twenty-five years and has translated many novels and short stories by Portuguese, Spanish, and Latin American writers, including Javier Marias, Fernando Pessoa, Jose Saramago, Bernardo Atxaga and Ramon del Valle-Inclan. She has won various prizes for her work, including, in 2008, the PEN Book-of-the-Month Translation Award and the Oxford Weidenfeld Translation Prize for her version of Eca de Queiroz's masterpiece The Maias, and, most recently, the 2011 Oxford Weidenfeld Translation Prize for The Elephant's Journey by Jose Saramago. She lives in Leicester, England. The author lives in Sao Paulo, Brazil."
Loading...
or
Not Currently Available for Direct Purchase