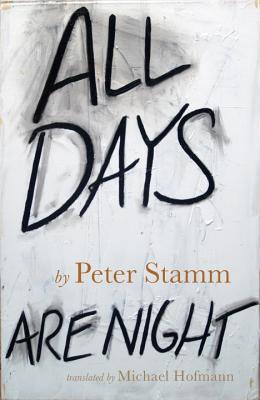 All Days Are Night

A novel about survival, self-reliance, and art, by Peter Stamm, finalist for the 2013 Man Booker International Prize

All Days Are Nightis the story of Gillian, a successful and beautiful TV host, content with her marriage to Matthias, even if she feels restless at times. One night following an argument, the couple has a terrible car accident: Matthias, who is drunk, hits a deer on the wet road and dies in the crash. Gillian wakes up in the hospital completely disfigured. Only slowly, after many twists and turns, does she put her life back together, and reconnects with a love interest of the past who becomes a possible future or so it seems. In Stamm's unadorned and haunting style, this new novel forcefully tells the story of a woman who loses her life but must stay alive all the same. How she works everything out in the end is at once surprising and incredibly rewarding.


Praise For All Days Are Night…

"ALL DAYS ARE NIGHT is a gracious variation on a bitter theme, and one in which the author's clarity of style comes to seem part of the cure: like a balsam, it soothes the characters' sufferings, and helps them back into their lives." --SPIEGEL ONLINE

Praise for SEVEN YEARS:
"SEVEN YEARS is a novel to make you doubt your own dogma. What more can a novel do than that?" --Zadie Smith, HARPER'S MAGAZINE

"Stamm's cleverness is to align a spareness that works in translation with his characters' instinctive fear of all things rich and intense. Lean as it is, his prose is wonderfully 'literary' in its fine integration of voice and story. The constant disorientation of his characters, their sense that their lives are interchangeable with any number of other lives, seem peculiarly suited to this era of globalization." --Tim Parks, THE NEW YORK REVIEW OF BOOKS

Peter Stamm is the author of the novels Seven Years, On a Day Like This, and Unformed Landscape, and the short-story collections We re Flying and In Strange Gardens and Other Stories. His prize-winning books have been translated into more than thirty languages. For his entire body of work and his accomplishments in fiction, he was short-listed for the Man Booker International Prize in 2013, and in 2014 he won the prestigious Friedrich Holderlin Prize. He lives in Switzerland. Michael Hofmann has translated the work of Gottfried Benn, Hans Fallada, Franz Kafka, Joseph Roth, and many others. In 2012, he was awarded the Thornton Wilder Prize for Translation by the American Academy of Arts and Letters. His Selected Poems was published in 2009, and Where Have You Been? Selected Essays in 2014. He lives in Florida and London."
Loading...
or
Not Currently Available for Direct Purchase