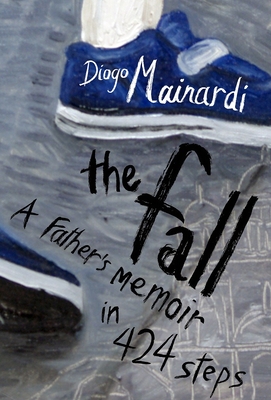 A father's memoir in 424 steps

“In this memoir, Mainardi, the great Brazilian journalist/novelist, traces the life and sufferings of his son, Tito. Due to the gross negligence of the hospital in which Tito was born, he has been afflicted with cerebral palsy. Tito's story is told in 424 parts - two or three per page - by turns angry, loving, and poetic, that mirror the greatest number of steps Tito has ever taken without falling down. Along the way, Mainardi ruminates about art history, philosophy, literature, and what it is to love someone unconditionally, through every tribulation that arises, and at whatever cost.”
— Conrad Silverberg, Boswell Book Company, Milwaukee, WI
View the List

THE FALL is a memoir like no other. Its 424 short passages match the number of steps taken by Diogo Mainardi's son Tito as he walks, with great difficulty, alongside his father through the streets of Venice, the city where a medical mishap during Tito's birth left him with Cerebral Palsy.

As they make their way toward the hospital where both their lives changed forever, Mainairdi begins to draw on his knowledge of art and history, seeking to better explain a tragedy that was entirely avoidable. From Marcel Proust to Neil Young, to Sigmund Freud to Humpty Dumpty, to Renaissance Venice and Auschwitz, he charts the trajectory of the Western world, with Tito at its center, showing how his fate has been shaped by the past.

Told with disarming simplicity; by turns angry, joyful, and always generous, wise and suprising, THE FALL is an anstonishing book.

Praise For The Fall: A father's memoir in 424 steps…

"Genius…Each of the text’s 424 fragmentary entries exemplifies the wild, illogical path the mind takes on the way to getting a grip, or to losing one…Mainardi has crafted a masterly work in the best memoir tradition, placing emphasis less on what happened than on what he (and therefore we) can perceive because it happened." —The New York Times Book Review

"Odd and enchanting...Paternal rage, fear, guilt, and joy suffuse every page...Any parent of a child with or without a disability will appreciate [The Fall's] eloquence." —The Boston Globe

"Mainardi creates a particular journey into the universe of his mind, directed by his son." —Publishers Weekly

"A heartbreaking, brain-expanding hymn of love by a father for his son." —Oprah.com

"Mainardi...picks the world up and erects it as a monument of meaning to his own son." —Financial Times

"[I]ndelible...This poetic and unsentimental memoir shines with a father’s love and a child’s indomitable spirit." —BBC.com

"Heartbreaking, astonishing and wise, Mainardi’s telling of Tito’s story is not to be missed." —Book Reporter

"[O]riginal, defying common precepts of what the reader believes he is reading." —CounterPunch Weekend Edition

“The Fall is a mercurial and enriching walk through 'off-script' fatherhood, cerebral palsy, art history, and this commonplace mystery, love. The Fall is wise and kind and moving.” —David Mitchell, best-selling author of Cloud Atlas

“A wise and unsentimental description of what it is like to be parent to a child with cerebral palsy—an episodic portrait of a very intimate paternal journey.” —Andrew Solomon, National Book Award–winning author of Far from the Tree and The Noonday Demon

“Fathering a disabled child, like the plaza outside the Campo Santi Giovanni e Paolo to which Diogo Mainardi consistently returns, is uneven terrain. In The Fall, Mainardi traverses that terrain in 424 lucid, deeply arresting steps.” —Ron Suskind, Pultizer Prize–winning journalist and author of Life, Animated: A Story of Sidekicks, Heroes, and Autism.

“The Fall, Diogo Mainardi's remarkable celebration of his son Tito, who was born with cerebral palsy because of a doctor's negligence, is intensely moving, rational, literate, and an absolute joy to read from start to finish.” —John Berendt, New York Times best-selling author of Midnight In the Garden of Good and Evil and The City of Falling Angels

“The Fall is a moving portrait of a relationship with a child and a place.  It is a rare book; by turns heartbreaking, angry, and lyrical.” —Edmund de Waal, author of The Hare with Amber Eyes

"[The Fall] will intrigue, delight and surprise you." —BLOOM Blog

"The Fall connects the disparate, and what results is an artful collage of acceptance, growth and appreciation." —Sacramento News & Reviews

"[E]nthralling...a stirring reminder of how much a fallacy 'inferiority' is." —The Jersey Journal

Diogo Mainardi is a Brazilian writer, journalist, and TV commentator, known for his articles in Brazil's largest weekly magazine, Veja.

Margaret Jull Costa has been a literary translator for over twenty-five years and has translated many novels and short stories by Portuguese, Spanish, and Latin American writers, including Javier Marías and José Saramago. She has won various prizes for her work, including, in 2008, the PEN Book-of-the-Month Translation Award and the Oxford Weidenfeld Translation Prize for her version of Eça de Queiroz's masterpiece The Maias, and, most recently, the 2011 Oxford Weidenfeld Translation Prize for The Elephant's Journey by José Saramago. She lives in Leicester, England.