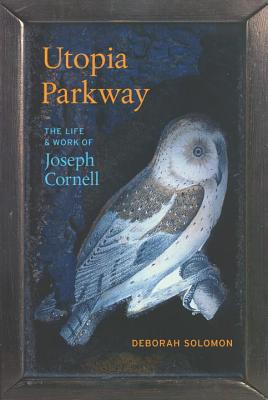 The Life and Work of Joseph Cornell

Few artists ever led a stranger life than Joseph Cornell, the self-taught American genius prized for his enigmatic shadow boxes, who stands at the intersection of Surrealism, Abstract Expressionism, and Pop Art. Legends about Cornell abound—the shy hermit, the devoted family caretaker, the artistic innocent—but never before has he been presented for what he was: a brilliant, relentlessly serious artist whose stature has now reached monumental proportions.

Praise For Utopia Parkway: The Life and Work of Joseph Cornell…

“Deborah Solomon’s admirable biography illuminates the life of the man without diminishing the mystery of his art.” —New York Magazine

“A principal virtue of this biography . . . is that it challenges in a very authoritative way the received idea of Cornell as merely the timorous recluse, the marginal artist of Utopia Parkway.”
—James R. Mellow, New York Times Book Review

"Deborah Solomon's clear-eyed and sympathetic narrative does for [Cornell's] life what he, as an artist, did for his penny world...It is a book about Cornell I would not dare to have hoped for in our mean and deconstructionist age." —Arthur C. Danto, Art Critic, The Nation

Deborah Solomon is a nationally acclaimed art critic, journalist, and biographer. She writes primarily for the New York Times, and her weekly column, “Questions For,” ran in the New York Times Magazine from 2003 to 2011. Her art reviews appear regularly on WNYC Radio. Solomon was educated at Cornell University and received a master’s degree from the Columbia University School of Journalism. She lives in New York City with her family.
Loading...
or support indie stores by buying on
(This book is on backorder)