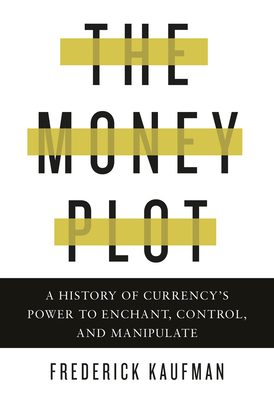 A History of Currency's Power to Enchant, Control, and Manipulate

Half fable, half manifesto, this brilliant new take on the ancient concept of cash lays bare its unparalleled capacity to empower and enthrall us.

Frederick Kaufman tackles the complex history of money, beginning with the earliest myths and wrapping up with Wall Street’s byzantine present-day doings. Along the way, he exposes a set of allegorical plots, stock characters, and stereotypical metaphors that have long been linked with money and commercial culture, from Melanesian trading rituals to the dogma of Medieval churchmen faced with global commerce, the rationales of Mercantilism and colonial expansion, and the U.S. dollar’s 1971 unpinning from gold.

The Money Plot offers a tool to see through the haze of modern banking and finance, demonstrating that the standard reasons given for economic inequality—the Neoliberal gospel of market forces—are, like dollars, euros, and yuan, contingent upon structures people have designed. It shines a light on the one percent’s efforts to contain a money culture that benefits them within boundaries they themselves are increasingly setting. And Kaufman warns that if we cannot recognize what is going on, we run the risk of becoming pawns and shells ourselves, of becoming characters in someone else’s plot, of becoming other people’s money.

Praise For The Money Plot: A History of Currency's Power to Enchant, Control, and Manipulate…

“There is a lot of erudition in Mr. Kaufman’s analysis of money as a form of storytelling. The word for semiotics, or the study of symbols, Mr. Kaufman notes, comes from ‘the ancient Greek word seme, which means both “word” and “coin.”’ The history of money is the history of communication systems. Like language, money is rooted in arbitrary custom even as it expands into the basis for rational cooperation among strangers. The word credit comes from the Latin word credere, which means ‘to believe.’ All money depends on the faith of those who use it. And like any powerful belief, money can be exploited by some to manipulate the minds of others.” —Wall Street Journal

“Fascinating…Kaufman has a sharp eye for colorful anecdotes and a witty and incisive prose style. The result is an appealing compendium of musings and money-related minutiae.” —Publishers Weekly

“[A] scholarly history of cash and its metaphorical significance…Tracing the impact of the rise of financial markets, Kaufman links events and ideas as disparate as Richard Nixon’s decision to untether the dollar from gold and Claude Lévi-Strauss’ concept of the ‘floating signifier.’” —Kirkus Reviews

“You’ll often hear people say, either jokingly or seriously, that ‘Money isn’t real.’ Debt is a fiction with real consequences. But why have such fictions been so hard to escape? Why can’t we just get rid of money? Kaufman’s engagement with these questions obviously comes at a time when economic inequalities have been exacerbated in arbitrary, unprecedented ways.” —Literary Hub

“In this unusual and original book, Frederick Kaufman tells the history of money in its double guise as a medium of exchange and a symbol of value. In its first form it strives for fixity, but as a symbol of our fluctuating hopes, fears, and desires, fixity perpetually eludes it. Being a measure of our freedom to dream, money can never be given a fixed value in a free society. Required bedtime reading for central bank governors tasked with ‘controlling the money supply.’” —Robert Skidelsky, Emeritus Professor of Political Economy at Warwick University and coauthor of How Much Is Enough?

“Fascinating. An irreverent, grand, and captivating history tour of money: what it is and what it does to each and all of us.” —George Papaconstantinou, former finance minister of Greece and author of Game Over: The Inside Story of the Greek Crisis

“With well-deserved authority and a pleasing narrative flair, Frederick Kaufman explores the origins of money—why we have it, where it came from, and what it means today. If you ever wondered why people are willing to accept a funny-looking piece of paper in exchange for a richly marbled New York strip steak, this is the book for you.” —William D. Cohan, New York Times bestselling author of House of Cards and The Last Tycoons

“In The Money Plot, Frederick Kaufman masterfully unravels the fascinating tale of money as an ever-changing reflection of whatever people believe or need it to be, and as defined by historical period, perspective, and circumstance. From beads to gold to paper to bitcoins to yes, bacon, Kaufman takes us on a journey through a remarkable diversity of leaders, events, relationships, and products to provide a provocative biography of money itself. A must-read for anyone wondering just how much money central banks can create, how high can markets go, and how much speculation we can endure—before the next crisis.” —Nomi Prins, author of Collusion: How Central Bankers Rigged the World and All the Presidents’ Bankers

“A splendid treatment of money-as-metaphor, from Midas and Gorgias to Jackson and Biddle, and on to Nixon, Connally, and the end of gold.” —James K. Galbraith, author of The End of Normal

“Economists have long understood that we hold paper money only because we believe others will want to hold it too. In this fascinating book, Frederick Kaufman takes the argument one step further: those beliefs can only be sustained by stories. The story of money is a story. It is not from the benevolence of the banker, the stock broker, or the financier that we expect our dinner, but from their regard for the tales that only gifted fabulists like Kaufman can tell.” —Andrés Velasco, former Finance Minister of Chile and current Dean of the School of Public Policy at the London School of Economics

“In The Money Plot, Frederick Kaufman offers a startling thesis—that money is a metaphor, a fiction—and makes it plausible by brilliantly interweaving economics, literary theory, anthropology, and political history. Distilling vast erudition into wonderfully readable prose, Kaufman gives us an important book that brims with fresh insights into the ways that money, from ancient times to today, has been a floating symbol with no stable meaning.” —David S. Reynolds, winner of the Bancroft Prize for American History and author of Abe: Abraham Lincoln in His Times

“A tantalizing analysis of how the lifeblood of the market came into being, and how it can make or break the capitalist system. You will never grasp the true meaning of money, now and into the future, without reading this book.” —Mauro F. Guillén, author of 2030: How Today’s Biggest Trends Will Collide and Reshape the Future of Everything

Frederick Kaufman, an English professor by training and profession, has for the past decade focused his attention on the fiction that is money. His unorthodox insights into the ways of Wall Street have resulted in numerous magazine articles for publications ranging from Scientific American to Wired to Foreign Policy to Harper’s, as well as television appearances on NBC, Bloomberg, Fox Business Network, and Democracy Now!, and invitations to lecture in both the United States and Europe, including an address to the General Assembly of the United Nations.
Loading...
or support indie stores by buying on
(This book is on backorder)