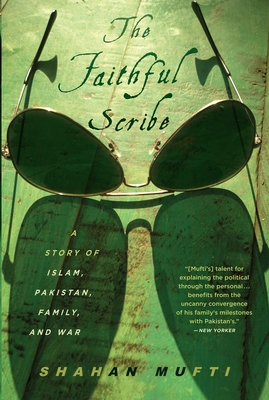 A Story of Islam, Pakistan, Family and War

A journalist explores his family’s history to reveal the hybrid cultural and political landscape of Pakistan, the world’s first Islamic democracy

Shahan Mufti’s family history, which he can trace back fourteen hundred years to the inner circle of the prophet Muhammad, offers an enlightened perspective on the mystifying history of Pakistan. Mufti uses the stories of his ancestors, many of whom served as judges and jurists in Muslim sharia courts of South Asia for many centuries, to reveal the deepest roots—real and imagined—of Islamic civilization in Pakistan.

More than a personal history, The Faithful Scribe captures the larger story of the world’s first Islamic democracy, and explains how the state that once promised to bridge Islam and the West is now threatening to crumble under historical and political pressure, and why Pakistan’s destiny matters to us all.

Praise For The Faithful Scribe: A Story of Islam, Pakistan, Family and War…

"The Faithful Scribe is an impassioned and insightful look into the heart of a troubled but vital country. This is a history of Pakistan from the pen of a keen observer, whose own story represents Pakistan's past and whose vision reflects its hope for the future." —Vali Nasr, New York Times bestselling author of The Dispensable Nation: American Foreign Policy in Retreat

"In The Faithful Scribe, Shahan Mufti, who calls himself '100 percent American and 100 percent Pakistani,' sets out to explain the country's present-day turbulence through the prism of its history…. Mr. Mufti deserves credit for framing Pakistan's story in terms of ideas, not merely events. He intuitively grasps that, though Pakistan is no theocracy, it shares some of the Saudi and Iranian sense of a larger Islamic mission." —Wall Street Journal

"[Mufti's] talent for explaining the political through the personal—particularly the "tormented embrace" between his home countries—benefits from the uncanny convergence of his family's milestones with Pakistan's." —New Yorker

"A penetrating,  carefully crafted, and sometimes moving account that presents Pakistan through the lens of Mufti's family's history, offering a vivid new perspective on a troubled country that is at once intimate and sweeping." —Declan Walsh, New York Times Pakistan Bureau Chief

“Journalist Mufti incorporates the stories of his family and ancestors into a larger history of Pakistan and its post-9/11 political turmoil…This astonishingly detailed, well-researched history is brought to life by the addition of Mufti’s personal story and journalistic acumen.” —Publishers Weekly

"The rich cultural and religious history of Pakistan dictated through a journalist’s personal stories...An undeniable visionary, Mufti insightfully glances back at Pakistan’s past and nods hopefully toward its precarious future." —Kirkus

"Mufti’s incisive, sensitive book—half memoir, about his family’s deep roots in
Pakistan, and half history of the state, which he tells through the discovery of his own sprawling family tree—describes a place that might as well be invisible in that explosive analogy: a country with a unique, founding mission to merge constitutional democracy and Islam; a county defined today not by its peoples’ extremism but their shared history." —Daily Beast

"[A]n enlightened perspective on the history of Pakistan." —University of Richmond Newsroom

“If you want to understand Pakistan and the Pakistani-American relationship, read this book. Mufti combines the personal, familial, national and international, narratives in a uniquely revealing manner. He is Pakistani and an American. And he brings that special blend to a brilliant work.” —Ryan Crocker, American Ambassador to Pakistan, 2004-2007.

"After reading Shahan Mufti, a political junke like me feels as though she's begun to understand Pakistan for the first time. Movingly and compellingly written, The Faithful Scribe is invaluable reading for anyone who's ever asked 'What's really happening there?'" —Lesley Hazleton, author of The First Muslim and After The Prophet

“[Mufti] has written a book that takes you from the beginning of Pakistan in 1947 to now. He does this effortlessly, telling the story through his family’s experience.” —The Chester Telegraph

"Recounting the way the Islamic legal system was integrated with religion but was then plucked away as Western influence grew, discovering at the same time his own family’s connection to that system, are Mufti’s twin foci as he takes us back through the lives of his parents and then his ancestors and at the same time his country’s complicated history, its relationship to the Western world and the world at large.  Mufti manages to let us see Pakistan from its own perspective and from ours—something of vital importance to all of us if we are to understand the world as it exists today.” —The Inkslinger

“Doing complete justice to the title, this book gives you detailed circumstantial evidences of the past and current political situations in Pakistan. Mufti has intelligently used his family as the protagonist with the political instability of a merely 66-year-old nation as the backdrop… A good read for those who have an interest in history, and for those who want to know more about the first Islamic republic of the world, Pakistan.” —Hindustan Times

"Recommended...for those interested in Pakistan's history or in how politcal decisions impact citizens." —Library Journal

"Both a personal and political memoir, The Faithful Scribe brilliantly blends the history of one family with the history of a nation as a whole. As he traces his family's past, Mufti writes with deep insight into the relationship between the two countries during the Reagan, Bush and Obama eras without ever feeling overly dogmatic. He is able to point out specific parallels between Pakistan and the United States that could have fell flat in a strictly historical text, making The Faithful Scribe a readable, fascinating peek into the hidden connections binding the countries from around the globe." —River City Reading

"A very lucid book that clarifies much of Pakistan’s history and gives us food for thought." —Arab Spring News

"Mufti really shines...[His] curiosity leads him to come up with a very interesting narrative, one that will go a long way towards helping Pakistanis (and people outside Pakistan) make sense of the nation." —Medium

"[The Faithful Scribe] is unique because Mufti’s perspective is pretty unusual...[T]his book is ultimately about humanity, and how ordinary lives are played out against a backdrop of violence and struggle." —TouchBASE

Shahan Mufti is a journalist who has written about Pakistan and the political evolution of Islam for Harper’s, Atlantic Monthly, New York Times Magazine, The Nation, Wall Street Journal, Bloomberg Businessweek, and many others. He splits his time between Pakistan and Richmond, Virginia, where he lives with his wife and teaches journalism at the University of Richmond. You can learn more about him and his work at his Web site, shahanmufti.com.
Loading...
or
Not Currently Available for Direct Purchase