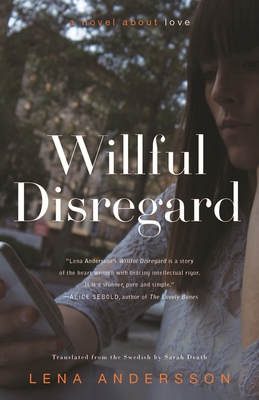 A Novel About Love

"I never thought a book about anxious Swedish intellectuals engaged in a philosophical back and forth would grip me like an airport read, but here we are. Jenni recommended this book as 'perfect, just read it' and she was right. From the very first page I was deep in the headspace of our protagonist, Esther, a woman willing to destroy her life for a man who barely acknowledges her. This slim volume explores the power dynamic cultural capital and fame bring to a relationship, and the lengths we're willing to go to in order to imagine we're getting what we want. Jenni said: 'I want to give this to every person I know who is in a one sided relationship. This will snap them right out of it.'" --Lena Dunham

Ester Nilsson is a sensible person in a sensible relationship. Until the day she is asked to give a lecture on famous artist Hugo Rask. The man himself is in the audience, intrigued and clearly delighted by her fascination with him. When the two meet afterward, she is spellbound.

Ester’s life is then intrinsically linked to this meeting and the chain of events that unfolds. She leaves her boyfriend and throws herself into an imaginary relationship with Hugo. She falls deeply in love, and he consumes her thoughts. Indeed, in her own mind she’s sure that she and Hugo are a couple.
Slowly and painfully Ester comes to realize that her perception of the relationship is different from his. She’s a woman who prides herself on having a rational and analytical mind, but in the face of her overpowering feelings for Hugo, she is too clever and too honest for her own good. Bitingly funny and darkly fascinating, Willful Disregard is a story about total and desperate devotion, and how willingly we betray ourselves in the pursuit of love.


Praise For Willful Disregard: A Novel About Love…

"Gripped me like an airport read...Perfect." —Lena Dunham, Lenny Letters

"Willful Disregard is lacerating in its intelligence and honesty; it makes you waver between loathing and compassion for basically all humans." —New Yorker, Page-Turner

“It’s observational precision that makes [Andersson’s] writing so startling . . . It’s almost scary how relatable her books is . . . It’s the kind of novel that forces you to remember every stupid thing you’ve done in the name of love.”—Vice

“The thoroughness and precision of each scene and feeling Andersson depicts see, as Virginia Woolf intended, every atom saturated. Every moment is heavy with significance . . . there is no better time for a story like Willful Disregard than in an age marked by overthinking the way cellphones enable people to do . . . panoramically realized, witheringly exacted, as stunning as a bright, cold Scandinavian morning.”—Full Stop

"Lean and compulsively readable...Andersson's sketching of the lovesick Ester and the preoccupied Hugo is so well done that every incensed text she sends him is another little piece of our collective heart as we follow a struggle that has existed for as long as human life: the lover and the loved." —Kirkus Reviews

"Few novels about misconstrued emotion are as clear-eyed as Swedish journalist/novelist Andersson’s 2013August Prize winner...A telling portrait of how we can misunderstand others—and ourselves." —Library Journal (starred review)

"A compelling read, a deeply philosophical book that attempts to make sense of love in the modern world." —Irish Examiner

“This is a slim volume, but every word packs a punch; every other sentence is so wise and funny that it begs to be quoted. Andersson’s gift for conjuring atmosphere and emotion out of small quotidian mishaps is extraordinary.” —The Guardian

“Dry wit and sharp insight . . . If [Andersson] sees an intellectual pretension, she pricks it.” —The Economist

"Speaking of intelligence. I’ll be damned if it isn’t Lena Andersson's middle name. She is known as the public's sharpest analysts in politics and cultural phenomena, but her new novel Arbitrary Conduct is about love - a subject so conventional that in this context it appears to be ingenious .. . Her novel is a creepy lucid dissection of the tangled psychology of love." —M Magazine

“Alas, most women have lived this story. Though few will have told it so well. Compelling and keenly observant.” —Lionel Shriver, author of We Need to Talk About Kevin

“Andersson writes smart, sharp-eyed, and often witheringly funny prose; nobody gets out of this situation with their pride, or their public persona, intact. Which is what makes it such addictive reading.” —Belinda McKeon, author of Solace and Tender

“Lena Andersson’s Willful Disregard is a story of the heart written with bracing intellectual rigor. It is a stunner, pure and simple.” —Alice Sebold, bestselling author of The Lovely Bones and Lucky

“A marvelously droll primer that, if handed out as part of middle-school curriculum, could prevent decades of dating headaches all over the world . . . wry.”
—Pasatiempo

Lena Andersson is a novelist and a columnist for Dagens Nyheter, Sweden’s largest morning paper. Considered one of the country’s sharpest contemporary analysts, she writes about politics, society, culture, religion, and other topics. Willful Disregard is her fifth novel and winner of the 2014 August Prize, Sweden’s highest literary honor.

Sarah Death is a translator, literary scholar, and editor of the UK-based journal Swedish Book Review. Her translations from the Swedish include Ellen Mattson’s Snow, for which she won the Bernard Shaw Translation Prize. She lives and works in Kent, England.
Loading...
or support indie stores by buying on