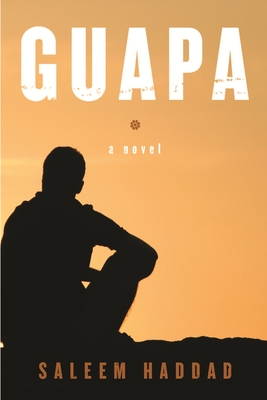 A debut novel that tells the story of Rasa, a young gay man coming of age in the Middle East

Set over the course of twenty-four hours, Guapa follows Rasa, a gay man living in an unnamed Arab country, as he tries to carve out a life for himself in the midst of political and social upheaval. Rasa spends his days translating for Western journalists and pining for the nights when he can sneak his lover, Taymour, into his room. One night Rasa's grandmother — the woman who raised him — catches them in bed together. The following day Rasa is consumed by the search for his best friend Maj, a fiery activist and drag queen star of the underground bar, Guapa, who has been arrested by the police. Ashamed to go home and face his grandmother, and reeling from the potential loss of the three most important people in his life, Rasa roams the city’s slums and prisons, the lavish weddings of the country’s elite, and the bars where outcasts and intellectuals drink to a long-lost revolution. Each new encounter leads him closer to confronting his own identity, as he revisits his childhood and probes the secrets that haunt his family. As Rasa confronts the simultaneous collapse of political hope and his closest personal relationships, he is forced to discover the roots of his alienation and try to re-emerge into a society that may never accept him.

Praise For Guapa: A Novel…

“[A] vibrant, wrenching début novel...sensuous and caustic, full of smoke and blood.” —The New Yorker

“An explosive debut. This day in a life of a gay man under a post-Arab spring dictatorship is as compelling as it is insightful…This immensely readable novel is fluent, passionate, and emotionally honest. Equally astute in its analysis of Arab and American mores, the book’s characters are nuanced and dynamic; it gives fresh life to the maxim ‘the personal is political.’” —The Guardian

“Guapa challenges the notion of what a ‘conventional’ love story should look like, and as one of few queer novels with an Arab protagonist, it must not be overlooked. Haddad has woven together a fascinating story with elements of a life richly lived, and if Guapa finds its way into the canon of queer literature, we will all be stronger for it.” —Lambda Literary

“Those looking for a nuanced portrait of gay life in the modern Middle East will find plenty to admire in this...promising debut.” —Kirkus Reviews

“Haddad presents a striking look at gay life, the psychological cost of conformity, and what it means to be true to yourself from a Middle Eastern perspective.” —Booklist

“Warmly recommended to all readers who are interested in issues of diversity and the Middle East.” —Library Journal

“Haddad’s unwavering dedication to detail, narrative arc, and consequence make Guapa necessarily poignant, uncomfortable, and meaningful. Like all good art, it moves beyond itself to shine a light on the world it bears.” —PopMatters

“The deeply personal and effortlessly readable narrative explores the negotiations that a queer, Muslim, American-educated man in love is forced to make in spaces where his identity is constantly called into question.” —The Huffington Post

“Set in an unnamed Middle Eastern country across the course of one day, Guapa follows the story of Rasa, a young gay man who has been caught in bed with a boyfriend by his overbearing grandmother…Rasa exists against a backdrop of civil unrest, heavy-handed police and homophobia. Faced with the prospect of never seeing his lover again, the novel gives us an insight into how it feels to be in love in a society where that love remains strongly forbidden. ‘I dreamt of kissing his cheek, because it struck me that to kiss your lover’s cheek in public was quite ordinary,’ Rasa writes, sharing his painful desire and longing in a story that is equal parts romance and thriller. Through flashbacks, we learn of Rasa’s younger life; his parents deaths, his awakening sexuality, and his time studying in the U.S., where he is distrusted in the wake of terror attacks in the west. Saleem Haddad is London based, but in this novel he draws on his Middle Eastern heritage to paint a truthful image of the manifestations and perceptions of homosexuality within Arab culture. His background as an aid worker, and in assisting refugees from the region, only further enhances his understanding of the wider problems he discusses; notably the fallout from the Arab Spring, and the rise of Islamic extremism. Guapa sets Haddad up as a literary voice capable of narrating untold stories of the modern gay experience, from one of the most complicated parts of the world.”—Attitude Magazine

“Haddad comes from a multi-cultural background: ‘Palestinian, Lebanese, Iraqi, German, Muslim and Christian,’ though he was born in Kuwait City, where same-sex relationships between men is punishable with up to seven years in jail. In his debut novel, Rasa, a young gay translator living in an unnamed Middle Eastern country, is caught with his lover (by his grandmother, no less), and then his best friend is arrested, and we follow the fallout—as well as delve into Rasa’s memories—throughout the day.”—The Literary Hub

“Guapa shines beautifully in its moments of sweetness and satire.” —Full Stop

“A provocative and emotional coming of age story, Guapa is an excellent debut novel.” —Bustle

“Haddad’s portrayal of a modern Middle East where being gay is still far from accepted in many places is riveting.” —Read it Forward

"By turns politically nuanced and romantically tender." —Next Magazine

“An engrossing and timely debut novel by a provocative new voice. Haddad's characters are unforgettable.” —Randa Jarrar, author of A Map of Home

Saleem Haddad was born in Kuwait City in 1983 to a Lebanese-Palestinian father and an Iraqi-German mother, and educated in Jordan, Canada, and the United Kingdom. He has worked as an aid worker with Doctors Without Borders in Yemen, Syria, and Iraq, and currently lives in London, where he advises on inclusion of refugees, women, and young people in the transition and peace processes of the Arab Spring.
Loading...
or support indie stores by buying on