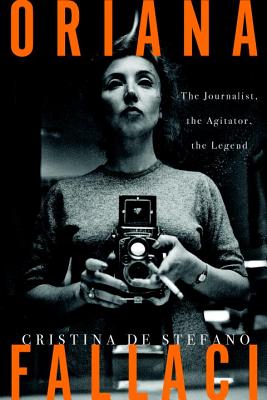 A landmark biography of the most famous Italian journalist of the twentieth century, an inspiring and often controversial woman who defied the codes of reportage.

Oriana Fallaci is known for her uncompromising vision. To retrace Fallaci’s life is to retrace the course of history from World War II to 9/11.

As a child, Fallaci enlisted in the Italian Resistance alongside her father, and her hatred of fascism and authoritarian regimes remained strong throughout her life. Covering the entertainment industry early in her career, she created an original, abrasive interview style, focusing on her subjects’ emotions, contradictions, and facial expressions more than their words. When she grew bored with movie stars and directors, she turned her attention to the international political figures of the time—Khomeini, Gaddafi, Indira Gandhi, Kissinger—always placing herself front and center in the story. Also a war reporter working wherever there was conflict, she would provoke controversies that became news themselves.

With unprecedented access to personal records, Cristina De Stefano brings to life this remarkable woman whose groundbreaking work and torrid love affairs are not easily forgotten. Oriana Fallaci allows a new generation to discover her story and witness the passionate, unstinting journalism so urgently needed in these times of upheaval and uncertainty.

“The first authorized biography we have of Fallaci, with access to new personal records, and welcome for that reason…[Oriana Fallaci] is never dull.” —New York Times

“De Stefano rises to the challenges of describing such a dramatic life…an examination of Fallaci’s methods that gets so close to her special magic that it ought to be required reading for all reporters. Indeed, anyone who takes time for this compelling biography will experience the tingle of that magic, and with it the continuing power of honest, hands-on journalism.” —Washington Post

“[Fallaci’s] interviews remain studies in speaking truth to power…Fallaci was a piquant, stylish beauty, self-consciously photogenic in the Joan Didion way, a midcentury woman writer vigilant about her public image. Fallaci lived a genuinely romantic life, too, with stormy loves and war wounds. But De Stefano, who had access to living friends, family members and colleagues as well as archives and letters, reveals another side to her life.” —New York Times Book Review

“[De] Stefano’s authoritative examination…offers bracing insight into a woman who defied convention…Fallaci’s era is over but the stories remain as vivid as her adventure-filled life.” —Boston Herald

“Exceptional…this biography is a must read.” —Literary Hub

“Brisk, even-handed…I suspect that Oriana Fallaci would have enjoyed it.” —Times Literary Supplement

“In this meticulous, perceptive, and dramatic portrait, De Stefano reveals the full intensity and sensitivity of a trailblazing warrior writer.” —Booklist (starred review)

“The great Italian writer gets her due in this short but captivating biography…a superb introduction to the life of an irreplaceable figure.” —Kirkus Reviews

“In Cristina De Stefano’s Oriana Fallaci, the stories about Italy’s most controversial journalist have the power to stun as they race forward, one more astonishing than the next…De Stefano handles Fallaci’s turbulent personal side with care…[and] has a terrific ear for Fallaci’s most piquant quotes…the spirit of the book: headlong and direct, all the while maintaining an understanding of a reporter’s commitment to asking hard questions.” —Washington Independent Review of Books

“The first major work to emerge in English since its subject’s death…[Oriana Fallaci] offers the most readable and approachable overview of Fallaci’s life.” —Standpoint

“This is as powerful a life story as you will ever read.” —Foreword

“Cristina De Stefano’s new book Oriana Fallaci: The Journalist, the Agitator, the Legend takes a fresh look at the exceptional life and career of Fallaci, while also revealing a softer side of the notoriously hard-headed and private intellectual.” —Women in the World, New York Times Affiliate

“Biographer Cristina de Stefano has written a fine portrait of Fallaci that is indeed, a la Fallaci, in its sharp journalistic style…De Stefano takes us inside Fallaci’s turbulent personal life and her formidable accomplishments as a skilled and courageous foreign correspondent. It is a potent reminder that real journalists were valued for much more than a sensational scoop or headline, and like Fallaci they put everything on the line at great personal cost for their chosen profession and craft.” —New York Journal of Books

“A terrific book about courage, ambition and old-fashioned Italian chutzpah. These are the qualities that made Oriana Fallaci one of the most celebrated journalists of her time. This is a compelling biography of a pioneer of journalistic fearlessness.” —Charles Kaiser, author of The Cost of Courage

“A gripping account of the controversial Italian journalist’s rise from schoolgirl Partisan courier to courageous war reporter, celebrated author and the world’s most feared and admired interviewer. Cristina De Stefano brings to life all the public success and private struggles of a woman who battled her way to the top of a world shaped by men, taking on Henry Kissinger, Muammar Gaddafi and Ayatollah Khomeini along the way. Oriana Fallaci is as vivid, bold and endlessly surprising as its subject.” —Rachel Aspden, author of Generation Revolution

Cristina De Stefano is a journalist and writer. She lives and works in Paris as a literary scout for many publishing houses in the world. Her books Belinda e il mostro: Vita segreta di Cristina Campo (2002) and Americane avventurose (2007) have been translated in French, German, Spanish, and Polish.

Marina Harss’ translations include For Solo Violin (Per Vionlino Solo), a war memoir by Aldo Zargani, and stories in The Forbidden Stories of Marta Veneranda, by Sonia Rivera-Vald. Her translations have also appeared in Bomb, Brooklyn Rail, and Autadafe. She is a researcher at The New Yorker, and lives in New York City.
Loading...
or
Not Currently Available for Direct Purchase