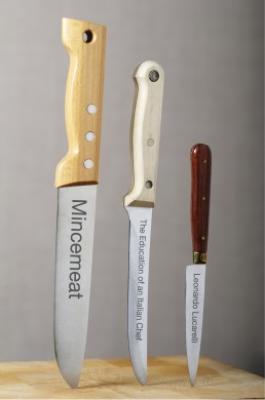 The Education of an Italian Chef

“This is not a typical chef story where the aspiring individual goes to culinary school, learns all the traditional styles, and then apprentices under a great chef to become established in the profession. Lucarelli started as a dishwasher and then through dumb luck became the chef in a restaurant after its two chefs fought with each other and left. Subsequent kitchens all offered a variety of challenges and disruptive, combative elements that helped to move Lucarelli's career along. If you want to experience some real 'behind the scenes' views of restaurant life, then do yourself a favor and read Mincemeat.”
— Jason Kennedy (M), Boswell Book Company, Milwaukee, WI
View the List

With the wit and pace of Anthony Bourdain, Italian chef and anthropologist Leonardo Lucarelli sketches the exhilarating life behind the closed doors of restaurants, and the unlikely work ethics of the kitchen.

In Italy, five-star restaurants and celebrity chefs may seem, on the surface, a part of the landscape. In reality, the restaurant industry is as tough, cutthroat, and unforgiving as anywhere else in the world--sometimes even colluding with the shady world of organized crime. The powerful voice of Leonardo Lucarelli takes us through the underbelly of Italy's restaurant world. Lucarelli is a professional chef who for almost two decades has been roaming Italy opening restaurants, training underpaid, sometimes hopelessly incompetent sous-chefs, courting waitresses, working long hours, riding high on drugs, and cursing a culinary passion he inherited as a teenager from his hippie father. In his debut, Mincemeat: The Education of an Italian Chef, Lucarelli teaches us that even among rogues and misfits, there is a moral code in the kitchen that must, above all else, always be upheld.

Praise For Mincemeat: The Education of an Italian Chef…

“The bad-boy chef memoir might as well have its own section in bookstores and Mincemeat places itself squarely in a tradition personified by Anthony Bourdain…Mr. Lucarelli is also a hilariously funny writer…His book reads like a picaresque novel as he roams from kitchen to kitchen, encountering thick-necked mobsters, lustful waitresses and cheating bosses. His description of an encounter with a pastry chef he meets at a party in Rome is delivered in typical deadpan humor.” –Wall Street Journal

"If you're in the mood for an internationally acclaimed, intellectually captivating memoir with an almost Conradian atmosphere, you'll be served well by maverick chef Leonardo Lucarelli's Mincemeat." –ELLE

“If you love food but not cooking, satisfy your appetite with Mincemeat: the Education of an Italian Chef, Leonardo Lucarelli’s kitchen confidential from bel paese.” –Family Circle Magazine

“Celebrated chef Lucarelli has a bad-boy reputation, but he’s more than just the Italian Anthony Bourdain. In his new memoir, the chef and anthropologist writes about his experiences working in some of Italy’s finest restaurants, where employees live hard and wild, but always adhere to an unwritten code of loyalty.” –MensJournal.com

“Personal and heartfelt…Mincemeat is a damn good memoir.” –Shelf Awareness

"Translated from the Italian, Lucarelli’s culinary autobiography moves at breakneck speed, just like his kitchen." –Booklist

Leonardo Lucarelli was born in India and has since resided in regions all across Italy, including Rome, Lazio, Emilia Romagna, Veneta, Trentino, and Tuscany. He entered the culinary world while a college student, and after completing a degree in anthropology, he became a chef. He has worked in the kitchens of fifteen restaurants—some Michelin-starred, and seven of which he served as chef. Lucarelli currently lives in L’Aquila, where he consults for several restaurants in Rome.

Lorena Rossi Gori, who was born in Scotland and raised in Australia, came to Italy on a family holiday and never left. An avid traveler and opera fan, she works as a conference interpreter and translator.

Danielle Rossi was born in Melbourne, Australia, and lived and studied in Hobart, Florence, Lucca, and Milan before eventually resettling in Melbourne, where she teaches Italian and translating at Monash University. Danielle and Lorena come from a long line of hoteliers and restaurateurs and know a thing or two about demented knife-hurling chefs.
Loading...
or
Not Currently Available for Direct Purchase