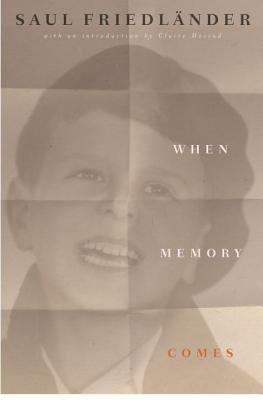 Praise For When Memory Comes: The Classic Memoir…

“Friedländer undertakes an evocative journey into his past that is likely to leave many a reader shaken.” —New York Times Book Review

“[When Memory Comes] is a small classic of Holocaust literature.” —The Guardian (US)

“A beautifully written (and beautifully translated) memoir of a tragic childhood.” —The New Yorker

“The most remarkable feature of When Memory Comes is its composure, an elegance that is unnerving. Friedländer describes his experiences in lean, graceful sentences; his language seems armored against the dissolution it describes.” —New York Review of Books

“When Memory Comes retains the very texture of recollection in a literary style characterized by tact and elegance.” —Wall Street Journal

“When Memory Comes is a quiet and deeply affecting masterpiece.” —The Nation

“When Memory Comes is a small masterpiece in the literature of the Holocaust.” —Tablet Magazine

Saul Friedländer is an award-winning Israeli-American historian and currently a professor of history (emeritus) at UCLA. He was born in Prague to a family of German-speaking Jews, grew up in France, and lived in hiding during the German occupation of 1940–1944. His historical works have received great praise and recognition, including the 2008 Pulitzer Prize for General Non-Fiction for his book The Years of Extermination: Nazi Germany and the Jews, 1939–1945.