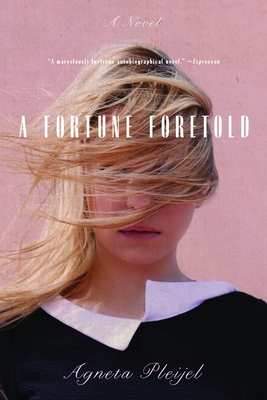 Agneta Pleijel writes a painful yet humorous autobiographical novel about childhood in the aftermath of World War II.

A prophecy is received by a beloved aunt, a prophecy that her young niece eagerly waits to see fulfilled.

The story takes place in the 1950s in the suburbs of Stockholm, in the university town of Lund, and in the United States. Neta’s childhood is in disarray. She reads—words give form to the vagueness of existence—and is busy thinking about the female sex, family, and the stupendous diversity of people in the world. Her father, a mathematician, and her mother, a musician, are in constant conflict, but
she loves them both. Gradually Neta realizes that she’s grown up in a lie and that she must step carefully through the war zone of her parents’ marriage.

This is an insightful tale about the search for truth, morality, and a place of your own in the world.

Praise For A Fortune Foretold: A Novel…

“Deeply inquisitive… A delicate study of a young girl's maturation, airy and filled with imagery of light…funny, familiar, and profound.” –KIRKUS REVIEWS

“…Pleijel’s fictional autobiography is distinctly written, melancholic in tone, yet there is hope and humor behind the darkness. [A FORTUNE FORETOLD] will strike a chord with lovers of literary historical fiction and those interested in exploring adolescence and the human condition in an evocative time and place.” –BOOKLIST

“Lucidly written autobiographical novel from distinguished Swedish author/critic Pleijel…readers who enjoy coming-of-age stories will appreciate how Pleijel refreshes the trop, realistically giving us a young heroine who understands the world in bits and pieces, as if flying through clouds.” –LIBRARY JOURNAL

“Poignant with humble prose, Pleijel’s memoir reflects upon feelings and questions both familiar and relatable as she grows to understand life and people in wholly different ways.” –WORLD LITERATURE TODAY

Agneta Pleijel was born in Stockholm in 1940. She has worked as a critic and cultural editor for various Swedish newspapers and magazines. She served as president of the Swedish PEN between 1987 and 1990, and has been a member of the academy Samfundet de Nio (The Nine Society) since 1988. From 1992 to 1996, Pleijel was a professor at the Institute of Drama in Stockholm. Apart from being one of Sweden’s foremost novelists, she is also a playwright and a poet. Her books have been translated into more than twenty languages.

Marlaine Delargy has translated novels by John Ajvide Lindqvist, Kristina Ohlsson, and Helene Tursten, as well as The Unit by Ninni Holmqvist and Therese Bohman’s Drowned and The Other Woman. She lives in England.
Loading...
or
Not Currently Available for Direct Purchase