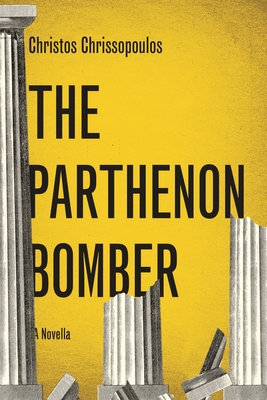 A novel at once metaphorical and iconoclastic, The Parthenon Bomber exposes the painful and maddening paradox of contemporary Greece.

“Blow up the Acropolis” was the 1944 call to action by the surrealist circle the Harbingers of Chaos. Sixty years later, a young man obliges. The Parthenon has been destroyed, the city orphaned. Is it still Athens?

All eyes are on the empty hill, now smoky and ashen. Cries of distress, indifference, and fanaticism fill the air. What were his reasons? How will he be punished for this unspeakable act of violence? What does it mean for Greece, now deprived of its greatest symbol?

This provocative tale reveals the unique dilemma of a country still searching for an identity beyond its past as the birthplace of Western civilization.

Praise For The Parthenon Bomber: A Novella…

“Inventive and disquieting, The Parthenon Bomber examines what defines us, what we take for granted, and what we assume to be lasting and true—and the unsettling way it might vanish in seconds. Chrissopoulos brings us to the darker corners of Athens—and every living, breathing city—to imagine a new, evocative reality where fact and fiction become terrifyingly blurred. This incisive, intelligent book hums with tension.”
—Natalie Bakopoulos, author of The Green Shore and contributing editor at Fiction Writers Review

“The first of his works to be translated into English, Chrissopoulos’s slight novella slyly imagines a monumental catastrophe. Inspired by a World War II–era manifesto by Yorgos V. Makris, secretary-general of the Society of Aesthetic Saboteurs of Antiquities, a young Athenian plots to blow up the famed Parthenon and free the stagnating city “from what was regarded as unsurpassable perfection.” The novella opens with a fascinating descent into the perpetrator’s mind, a “probable monologue” (the “authentic” confession having disappeared) that is at once a psychogeographical analysis of Athens and philosophical justification for the bombing...the overall effect is…haunting. The compiled dossier aims to impose order on the spectacular display of symbolic violence and its chaotic aftermath, an order which the dossier’s elliptical, dreamlike contents consistently explode.”—Publishers Weekly

“Multi-award-winning Greek novelist, essayist, and translator Chrissopoulos structures his tale as if he were presenting documentary evidence in the investigation of this crime. . . a meditation on the importance of artifacts …this peerlessly translated work is recommended mainly to informed readers interested in cultural issues.” —Library Journal

“Chrissopoulos’s texts offers a rationale for why someone in the grips of unbridled desperation would destroy an emblem of communal pride to draw attention to the grievances that lurk behind the facade that a society presents to the world.” –Barnes & Noble

“The Parthenon Bomber is the story of one town, one collective psyche, unsettled by the destruction of what it believed in. But if you want it to be, it can be more. … At times it felt like the Parthenon had exploded around me and I had to wait for the dust and debris to settle to see clearly. But for me its success lies in providing a glimpse of that certainty which we all long for when faced with a period of great change and with a past we can no longer rely on to define the present.” —European Literature Network

“[A] slender but deeply charged novella concerning an unspeakable—but sadly imaginable—act of terrorism...One can read Ch.K. as a nihilistic heir of Albert Camus' antihero Meursault, or one can see in Chrissopoulos' plainspoken tale, told as a multipart procedural, an extended metaphor for the decline of Greece as a poor stepchild to the European Union, overrun by refugees and mired in apathy...Reminiscent of a half-century-old ancestor, Vassilis Vassilikos' 1966 novel Z, in its sardonic protest of things as they are." —Kirkus Reviews

"The Parthenon Bomber is a slim volume that appealed to me initially due to its trim size and mustard-yellow cover. Published in Greek in 2010, it has now been brought out in English by Other Press, and its relevance hasn’t dimmed. During World War II, an anarchist group (appropriately named the Harbingers of Chaos) called for the famed Parthenon to be razed. In 2004, a 21-year-old Athenian does just that, bombing the monument and inciting endless varieties of societal debate. Did the Parthenon matter? Does Greece matter? What does it mean to be the cradle of civilization in the wake of such an uncivilized act? The bomber’s story is told through multiple voices, almost like—wait for it—a Greek chorus." —Literary Hub

“The Parthenon Bomber is a slim novella, presented essentially as a documentary work …The first version of this novel was published in 1996, before terrorist acts on iconic structures such as those on the World Trade Centers in New York, or the willful destruction of classic structures such as that of the Bamiyan Buddhas or Palmyra. Awareness of these now colors the reading of the text…The Parthenon Bomber could be seen as almost teasingly understated; your average thriller writer would have built a much fatter book around such a sensational(istic) premise. But in leaving so much for the reader to fill in or consider, it's quite effective too -- intellectually teasing, in a positive sense…certainly intriguing, and quite nicely done.” —Complete Review

“What is the relationship between a city and those memorials which dominate the landscape? Must all monuments last forever? Who decides when it is time to forget? Christos Chrissopoulos raises these questions in his stark novella The Parthenon Bomber…Chrissopoulos’s novella is a timely examination of how monuments dominate urban landscapes, and in some ways, subjugate citizens to a forced collective memory.” –Fiction Southeast

Christos Chrissopoulos is a novelist, essayist, and translator, and one of the most prolific young prose writers in Greece. He is the author of twelve books, was an Iowa Fellow in 2007, and has won several literary prizes including the Balkanika Prize (2015), the Prix Laure-Bataillon (2014), the Prix Ravachol (2013), and the Academy of Athens Prize (2008). In addition to writing, he is the founder and director of the DaseinFest International Literary Festival in Athens, and since 1999 he has collaborated with the visual artist Diane Neumaier on several art projects and exhibitions.

John Cullen is the translator of many books from Spanish, French, German, and Italian, including Philippe Claudel’s Brodeck, Juli Zeh’s Decompression, Chantal Thomas’s The Exchange of Princesses, and Kamel Daoud’s The Meursault Investigation. He lives in upstate New York.
Loading...
or
Not Currently Available for Direct Purchase