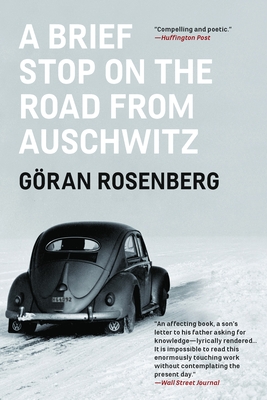 A Brief Stop on the Road From Auschwitz

On August 2, 1947 a young man gets off a train in a small Swedish town to begin his life anew. Having endured the ghetto of Lodz, the death camp at Auschwitz-Birkenau, the slave camps and transports during the final months of Nazi Germany, his final challenge is to survive the survival.

In this intelligent and deeply moving book, Göran Rosenberg returns to his own childhood to tell the story of his father: walking at his side, holding his hand, trying to get close to him. It is also the story of the chasm between the world of the child, permeated by the optimism, progress, and collective oblivion of postwar Sweden, and the world of the father, darkened by the long shadows of the past.

Praise For A Brief Stop on the Road From Auschwitz: A Memoir…

“An affecting book, a son’s letter to his father asking for knowledge—lyrically rendered… It is impossible to read this enormously touching work without contemplating the present day.”
—WALL STREET JOURNAL

“Rosenberg wields deep research and literary empathy in writing about the horrors his parents had lived through before he was born.”
—BOSTON GLOBE

“A Brief Stop on the Road from Auschwitz is a touching tribute to a man for whom the paradox of ‘individual repression and collective remembrance’ was simply too much to bear.” —TIMES LITERARY SUPPLEMENT

“I can't think of a second-generation work that is equal to A Brief Stop. It's a towering and wondrous work about memory and experience, exquisitely crafted, beautifully written, humane, generous, devastating, yet somehow also hopeful.”
—FINANCIAL TIMES

“A compelling and poetic reflection on what it took to escape and survive the aftermath of human extinction…This may be a grim subject but it's not a grim book, just a perfectly touching and revelatory read…”
—HUFFINGTON POST

“A profoundly moving act of remembering, but also a searing investigation of complicity, guilt and shame. Brilliantly and lethally done.”
—SUNDAY TIMES (UK)

"This brilliant, touching and heart-wrenching story... is my book of the year by some distance."
—JEWISH CHRONICLE

"This exquisitely wrought book is, among other things, a meditation on the workings of memory and history in one man’s life."
—LOS ANGELES REVIEW OF BOOKS

"[A] chiaroscuro composed of more shade than light but one that manages to be all the more revealing because of it. Rosenberg floors us with a shock conclusion and provides us with a wealth of insight on the way to it."
—THE DAILY BEAST

"[A]t once remarkable testimony and remarkable literature...Brimming with duty-bound love but inescapably tragic at its core, A Brief Stop on the Road From Auschwitz is a tour de force fully on par with Primo Levi's "If This Is a Man" and other literary classics of the Holocaust."
—ASSOCIATED PRESS

"Destined to become a classic...Göran Rosenberg has written a calm yet passionate account of events after Auschwitz, a memoir that should be read by anyone who ponders the infinite questions of good and evil...With A Brief Stop on the Road From Auschwitz, Rosenberg has not only given us a necessary book but, by confronting unspeakable sorrow with courage and reason, he has created a masterpiece marked by great intelligence and equally great emotional intensity."
—ARTS FUSE

"Moving and unflinchingly honest...[Rosenberg's] story will stay with you long after you’ve closed the book."
—THE IRISH EXAMINER

"Wonderful, incisive…  A BRIEF STOP ON THE ROAD FROM AUSCHWITZ—part history, part memoir, part essay on the meaning of survival—insists that the Holocaust didn’t end in 1945. The book challenges the powerful redemptive narrative offered by even official histories."
—WORDS WITHOUT BORDERS

“Understated, yet heart-wrenchingly poignant…Rosenberg’s story is utterly unforgettable…It is a chilling reminder of how  the consequences of war long outlived the ceasefire, leaving indelible marks on family life in the decades that followed.”
—THE INDEPENDENT (UK)

“A searing survivor's tale told by a son… A deeply felt story and a sobering reminder of the long shadows of the Holocaust.”
—KIRKUS

“There is no easy Holocaust book. This one, with its bolstering photographs and its intensely personal aspect, is brilliantly sorrowful. The son’s pilgrimage, augmented by research, quotes, and memories, is a hard road to walk, just as the original journey was for his father, in particular.”
—BOOKLIST

"Artfully constructed...poignant, but not sentimental...[m]ore than mere reportage, this book is also a venture into the darkest places of the human spirit."
—THE TABLET (UK)

"Rosenberg’s book left me stricken with sorrow—and overwhelmed with grateful wonder. I know of no book that tells the story so forcefully of how, for those who survived Auschwitz, even this experience had to be treated as a single episode in the course of a full life, regardless of the camp’s malignant persistence at the heart of identity. With its hypnotic, propulsive sentences—its ruthless disavowal of sentiment, and its inspiring filial compassion—A Brief Stop on the Road from Auschwitz manages to make the concentration camp story feel absolutely new again—vivid, shocking, and an urgent call upon our powers of empathy for the world today."
—George Prochnik, author of The Impossible Exile: Stefan Zweig at the End of the World

“‘Every road from Auschwitz is an individual miracle unto itself,’ writes Goran Rosenberg, and in this gripping and poetic memoir he imagines his way into the dark miracle of his own father's experiences during and after the Holocaust. Born in peaceful Sweden, Rosenberg tries to make sense of the history that allowed him to grow up there, years after his father had suffered through the horrors of the Lodz ghetto and the concentration camps. From its lyrical opening pages to its shocking conclusion, A Brief Stop on the Road from Auschwitz is an unforgettable book about memory, grief, and fate.”
—Adam Kirsch, Former Senior Editor at The New Republic and columnist for Tablet

“Subtle, chilling, and utterly absorbing, Goran Rosenberg’s memoir is also an excavation of a grueling post-war, too often hidden from history.  With a novelist’s instinct, Rosenberg travels amongst truths that want to be forgotten—in Poland, in Germany and in Sweden. This is a masterly and moving book that brings the great Sebald to mind.”
—Lisa Appignanesi, author of Losing the Dead

Göran Rosenberg was born in 1948 in Sweden, where he is a well-known author. In 1970 he left academia to work as a journalist for Swedish television, radio, and print. He is the author of several books, including the highly acclaimed Det Förlorade landet [The Lost Land: A Personal History of Zionism, Messianism, and the State of Israel].

Sarah Death is a translator, literary scholar, and editor of the UK-based journalSwedish Book Review. Her translations from the Swedish include Ellen Mattson’sSnow, for which she won the Bernard Shaw Translation Prize. She lives and works in Kent, England.
Loading...
or
Not Currently Available for Direct Purchase