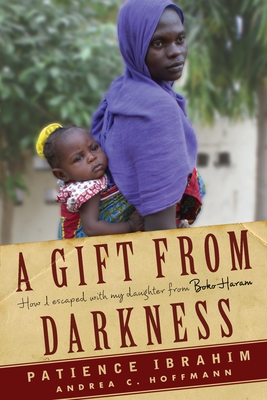 A Gift from Darkness

How I Escaped with My Daughter from Boko Haram

The inspirational story of a pregnant young Nigerian woman and the horrors she endured to save her unborn child when she was kidnapped by Boko Haram.

When she was nineteen, Patience Ibrahim's first husband was murdered by Boko Haram. She fled to the safety of her village and remarried several months later. Having prayed for a child for years, Patience is overjoyed when she discovers she is pregnant. But her joy is short-lived: Boko Haram soldiers are at her door. Brutally abducted and forced to convert to Islam, she lives in constant terror of what her kidnappers have in store for her. She finds herself alone in the world and fears her life is over.

For two months, Patience hides her pregnancy while facing the brutalities meted out by Boko Haram. By the sheer force of her determination to protect her baby, she and her child are able to survive. Now, she has entrusted journalist Andrea C. Hoffmann with her story, a powerful first-person account of Boko Haram's atrocities in Nigeria and Cameroon.

One of the first testimonies on the terrorist group's war crimes in Western Africa, A Gift from Darkness poignantly shows the human toll of a crisis that demands attention.

Praise For A Gift from Darkness: How I Escaped with My Daughter from Boko Haram…

“The Nigerian militant group Boko Haram came to the world’s attention four years ago when fighters abducted two hundred and seventy-six girls from a boarding school in the town of Chibok. Since then, the group has kidnapped thousands. One of those who was abducted was Patience Ibrahim. She was just nineteen years old and already a widow. Her story is told in a new book, A Gift from Darkness.” —NPR WEEKEND EDITION

"...offers a cleareyed view of the sociology underlying this sexual slavery...Ibrahim's bold firsthand account is powerful testimony to resilience and survival in the face of a kind of warfare that is becoming ever more common, its terror visited mostly on women." —KIRKUS REVIEWS

“Ibrahim carries us through her harrowing experiences with men in and out of Boko Haram, and details how she escaped terrorist captivity more than once with her daughter, Gift…A Gift from Darkness is a small glimpse into the violence that Boko Haram inflicts upon men and women in North Africa. Hoffmann weaves historical and cultural context throughout, allowing the reader to piece together Ibrahim’s nuanced experiences within larger narratives of gendered violence playing out both in the region and throughout history…A Gift from Darkness gives us a look into the unwavering determination of one woman whose story reflects the experience of many women at the hands of Boko Haram. Firsthand accounts of abuse, trauma, and refugee experiences bring insight and compassion to a readership, leading to more effective ways of addressing the needs of the people affected both in this region and various populations around the world. With a book as moving as this, we can see there is no substitute for the power of allowing survivors of trauma to tell their own stories.” —PLOUGHSHARES

"Patience Ibrahim had a secret — she was pregnant. The 17-year-old Nigerian woman and her husband had conceived just before Boko Haram militants had raided her village in the summer of 2014, kidnapping the women and slaughtering many of the men... In 'A Gift From Darkness: How I Escaped with My Daughter from Boko Haram,' (Other Press), out now, Ibrahim and co-writer Andrea C. Hoffmann, tell the story of her capture by the Islamic terrorist organization and her desperate struggle to keep her unborn child alive... the young mother is proud of the book, carrying a copy of it around with her and posing for photographs with it. Although she can’t read her own story, Ibrahim understands that telling it was an important act, Hoffman says." —NEW YORK POST

“While the reader absorbs the quiet communications between the girls spoken always in whispers, the words horrifying, horrendous and horrific immediately come to mind. But what Patience Ibrahim and her fellow hostages witnessed, endured and felt after being brutally kidnapped, extend far beyond words…Even while the nightmare was still happening, Patience was eager to share her story with Author Andrea Hoffman. Ms. Hoffman placed herself in dangerous situations as well. Her courage and dedication is to be honored and applauded.” —NEW YORK JOURNAL OF BOOKS

“Patience Ibrahim was a married woman and pregnant when she was abducted while bringing home water along a village road in Gwoza Nigeria by Boko Haram. A Christian, she was forced to take a new name and threatened with death if she didn’t convert to the Boko Haram’s warped idea of Islam… the tale of a mother resolutely protecting her child at the literal cost of her life is remarkable, and you won’t easily forget what happens in this memoir.” —ADVICE SISTERS

“This is a captivating, harrowing book. Patience Ibrahim's story will rattle, enrage, and inspire you. Told with suspense, emotion, and sensitivity, A Gift from Darkness shines a sorely needed light on the gruesome world of Boko Haram. But this is more than an eyewitness account of monstrous cruelty—it is a tale of one woman’s remarkable courage and a stirring reflection on the power of faith and love.” —Adam Fifield, author of A Mighty Purpose: How Jim Grant Sold the World on Saving Its Children

"A truly terrifying journey. This is the riveting story of the compelling, human, and horrific experience of Patience Ibhahim." —Ramaa Mosley, producer of Girl Rising

Andrea Claudia Hoffmann is a political editor and Middle East expert for the news magazine Focus and has been traveling the region for more than fifteen years.  She recently co-authored The Girl Who Beat ISIS: Farida's Story (Vintage, 2016), and Raif Badawi, the Voice of Freedom (Other Press, 2016). Hoffmann's reportages about Iran have been awarded numerous prizes.

Patience Ibrahim lives with her daughter Gift in Maiduguri, in northern Nigeria.
Loading...
or
Not Currently Available for Direct Purchase