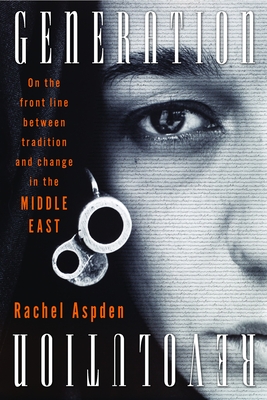 Generation Revolution unravels the complex forces shaping the lives of four young Egyptians on the eve and in the aftermath of the Arab Spring, and what their stories mean for the future of the Middle East.

In 2003, Rachel Aspden arrived in Egypt as a twenty-three-year-old journalist. She found a country on the brink of change. The two-thirds of Egypt’s eighty million citizens under the age of thirty were stifled, broken, and frustrated, caught between a dictatorship that had nothing to offer them and their autocratic parents’ generation, defined by tradition and obedience.

In January 2011, the young people’s patience ran out. They thought the revolution that followed would change everything. But as violence escalated, the economy collapsed, and as the united front against Mubarak shattered into sectarianism, many found themselves at a loss.

Following the stories of four young Egyptians—Amr the atheist software engineer, Amal the village girl who defied her family and her entire community, Ayman the one-time religious extremist, and Ruqayah the would-be teenage martyr—Generation Revolution exposes the failures of the Arab Spring and shines new light on those left in the wake of its lost promise.

Praise For Generation Revolution: On the Front Line Between Tradition and Change in the Middle East…

“Generation Revolution offers sharp insight into how the youth movement came together and why it fell apart…fascinating.” —Washington Post

“Having lived on and off in Cairo for more than a decade, Aspden has a clear eye for its marvelous and maddening details…her stories are always compelling…Generation Revolution is a welcome prism, separating the spectrum of political Islam through the coming of age of its characters.” —The Guardian

“Weaving in dramatic moments of Egypt’s recent past with vivid depictions of its contemporary culture, Aspden uses her subjects’ candid narratives to reveal how the pressures of a corrupt state, a stagnating economy, a restless and disenfranchised youth, the repression of women, and the infiltration of Western innovations such as the Internet led Egyptians to erupt into revolt…a sobering but necessary education in ‘the intractable suffering in the region’ that Western countries can no longer afford to ignore.” —Publishers Weekly

“[A] fascinating study…a deep dive into one of the revolution’s most critical faultlines: the ongoing struggle waged by Egypt’s youth to articulate their own voices…What makes Generation Revolution so interesting is its weaving together of national political unrest with the micro-level dramas of daily life.” —Evening Standard

“An earnest eyewitness account of a nation in tumult.” —Kirkus Reviews

Rachel Aspden is a former literary editor of the New Statesman and now works at The Guardian. She has written on the Middle East, India, Pakistan, and South Africa for the New Statesman, The Guardian, Observer, Prospect, and New York Review of Books. She lived in Cairo from 2003–2005 and 2012–2015. In 2010 she was awarded a yearlong travel fellowship by the Winston Churchill Memorial Trust to research activists working to counter extremism within Islam. She is currently based in London.
Loading...
or
Not Currently Available for Direct Purchase