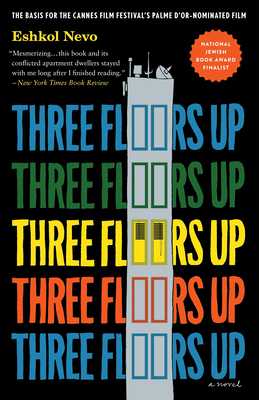 Set in an upper-middle-class Tel Aviv apartment building, this best-selling and warmly acclaimed Israeli novel examines the interconnected lives of its residents, whose turmoils, secrets, unreliable confessions, and problematic decisions reveal a society in the midst of an identity crisis.

On the first floor, Arnon, a tormented retired officer who fought in the First Intifada, confesses to an army friend with a troubled military past how his obsession about his young daughter's safety led him to lose control and put his marriage in peril. Above Arnon lives Hani, known as "the widow," whose husband travels the world for his lucrative job while she stays at home with their two children, increasingly isolated and unstable. When her brother-in-law suddenly appears at their door begging her to hide him from loan sharks and the police, she agrees in spite of the risk to her family, if only to bring some emotional excitement into her life. On the top floor lives a former judge, Devora. Eager to start a new life in her retirement, Devora joins a social movement, desperately tries to reconnect with her estranged son, and falls in love with a man who isn't what he seems.

A brilliant novelist, Eshkol Nevo vividly depicts how the grinding effects of social and political ills play out in the psyche of his flawed yet compelling characters, in often unexpected and explosive ways.

Born in Jerusalem in 1971, Eshkol Nevo studied copywriting at the Tirza Granot School and psychology at Tel Aviv University. Today, Nevo owns and co-manages the largest private creative writing school in Israel and is considered the mentor of many upcoming young Israeli writers. His novels have all been top bestsellers in Israel. His novel Homesick (Chatto & Windus, 2008) was a finalist for the prestigious Independent Foreign Fiction Prize, World Cup Wishes was a finalist for the Kritikerpreis der Jury der Jungen Kritiker (Austria, 2011), and Neuland was included in The Independent's list of Books of the Year in Translation (2014)

Praise For Three Floors Up: A Novel…

“Mesmerizing…this book and its conflicted apartment dwellers stayed with me long after I finished reading.” —NEW YORK TIMES BOOK REVIEW

“Eshkol Nevo, in his astoundingly moving new book, Three Floors Up, brilliantly captures how the landscape of a marriage can become tenuous and dark while parents struggle with children who seem to need a little extra help. His three loosely interwoven stories take place in an upper-middle-class apartment building in Tel Aviv where neighbors observe one another quietly, grappling with their own growing desperation.” —JERUSALEM POST

"Nevo (Neuland, 2014, etc.) is a bestselling Israeli author, and his most recent book to be translated into English makes it easy to understand why. His writing is compelling...[he] is a funny, engaging writer." —KIRKUS REVIEWS

“Israeli bestseller Nevo (Neuland) returns with a transporting novel about the furtive lives of three tenants in a suburban Tel Aviv apartment building…Nevo’s narrators range from despicable to endearing, and he handles each with a sure hand, resulting in a multifaceted narrative that is easy to be carried away by.” —PUBLISHERS WEEKLY

“Best-selling Israeli novelist Nevo, his Hebrew fluidly translated by Sondra Silverston, cleverly infuses these quotidian albeit schadenfreude-inducing dramas with numerology (“everything is in threes”), Freudian analysis (the “three floors up” of id, ego, superego), the power of secrets (plus the greater threat of revenge), and the literary necessity for confessions (“if there is no one to listen–there is no story”).” —BOOKLIST

“The novella-length chapters offer a compelling critique of Israeli society. But Nevo’s chief strength lies in his ability to fashion wonderfully relatable characters whose troubled voices, as well as mysterious and impulsive moods, render the work a page-turner…Nevo’s talent for embedding telling character traits and cultural anecdotes through quick one-liners is perhaps his greatest asset. The prose sings in places, and Three Floors Up is difficult to put down.” —JEWISH NEWS SERVICE

"Israeli author Eshkol Nevo’s novel explores the social and cultural fabric of Israel through three tenants on three separate floors of an apartment building in Tel Aviv. Their individual stories and struggles are braided together with tight, terse prose, forming a cohesive picture of the broader society in which they reside." —WORLD LITERATURE TODAY

“A brilliant novelist, Eshkol Nevo vividly depicts the grinding effects of social and political ills played out in the psyche of these flawed, compelling characters, often in unexpected and explosive ways.” —BOOKREPORTER

“Lively, tripartite novel by Eshkol Nevo, a highly admired Israeli author…Nevo creates three compulsive narrators, three unsparingly candid monologues, three stories that expose the psyches of people caught at critical points in their lives…Perceptive and compelling, Three Floors Up plays with the form of the novel itself and keeps the reader absorbed in its sets of triads.” —JEWISH BOOK COUNCIL

“Three Floors Up by Israeli novelist Eshkol Nevo offers an intriguing and layered view into life in Tel Aviv. The novel centers on three families living on separate floors of an apartment building on the outskirts of the city. Through the lives and interwoven stories of the three families, Nevo presents a broad and complex portrait of Israeli society.” —SIGNATURE READS

“A brilliant novelist, Eshkol Nevo vividly depicts the grinding effects of social and political ills played out in the psyche of these flawed, compelling characters, often in unexpected and explosive ways.” —JEWISH REVIEW MEDIA

"Eshkol Nevo is a fascinating story teller who gives the reader a broad and diverse picture of Israeli society.” —Amos Oz, internationally bestselling author of A Tale of Love and Darkness

“Recognizable characters and situations make Eshkol Nevo’s newest novel, Three Floors Up, an economical yet masterful invention of three households in a suburban Tel Aviv building...Written simply but imaginatively, translated fluidly by Sondra Silverston, each story is an evening’s reading because you won’t want to stop.” —AMERICAN JEWISH WORLD

“Eshkol Nevo is a brilliant literary chemist who succeeds in extracting from daily life’s most mundane events, the deepest crystallized essence of the contemporary Israeli psyche.” —Etgar Keret

"This is a thought-provoking book, but it remains very accessible and fun to read. Although each section can be read independently, it is anything but a loose collection of stories. There is a uniform atmosphere of mystery and foreboding, with a barely concealed threat of violence. Readers will need to read the novel in its entirety to fully appreciate the gradual build-up of unease, while the ending provides a solution for some, but not for all." —NECESSARY FICTION

"...gripping. Pain, lust, loneliness, nostalgia, bitterness, and maternal love are all locked in an intricately choreographed dance in this wonderful collection of interwoven stories.” —KVELLER