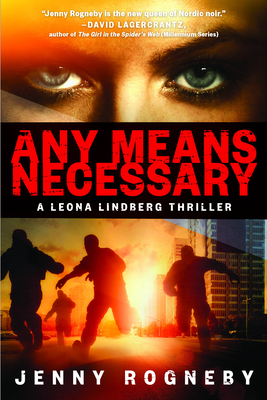 "Jenny Rogneby is the new queen of Nordic noir. Her heroine is like no one else. And the way she writes! She grabs you and you just can't stop reading." —David Lagercrantz, author of the #1 best-selling The Girl in the Spider's Web

In the highly anticipated sequel to Leona: The Die Is Cast, a corrupt detective deals with the emotional fallout of her actions while investigating a terrorist attack in the heart of Stockholm.

A man blows himself up outside the Parliament House in Stockholm, but miraculously survives. Was he a lone wolf, or are there more heinous acts to follow? Leona Lindberg is put on the case. But Leona, who has barely escaped her trials from the last case, is focused on other things. Her family is shattered, she is living under threat, and desperately needs liquid assets. It's lucky then, that she can think outside the box like no other detective. With one foot on each side of the law, she mounts a special operation of grand proportions. And the higher the risk, the higher the rewards.

Praise For Any Means Necessary: A Leona Lindberg Thriller…

“Edgy…Rapid-fire cuts between narrators convey the vicious uncertainties of Leona’s near-sociopathic hallucinogenic struggle to pay off her debt and make a better life for her school-aged daughter. Rogneby draws effectively on her background in criminology and experience as a Stockholm police detective.” —Publishers Weekly

“As a character, Leona asks a lot of the reader. She is savvy, decisive, and resourceful, in many ways admirable, but she is also relentlessly selfish, willing to inflict pain and misery to get what she wants…She differs from typical noir antiheroes—she’s not a disappointed idealist but rather an amoral pragmatist. But never mind. This installment is more completely plotted and more involving than the first, and if Leona seems a little inhuman, well that’s Leona being Leona. Leona’s back! Lock the henhouse!” —Kirkus Reviews

Jenny Rogneby was born in Ethiopia, but was given away for adoption when she was one year old. She grew up in northern Sweden, studied criminology at Stockholm University, and became an investigator in the Stockholm City Police Department. Her work inspired her to create the character of Leona and write this best-selling crime novel, the first in the Leona series. Before her career in law enforcement, Rogneby was a singer and member of the pop group Cosmo4

Agnes Broomé began her studies at the University of Edinburgh, where she completed an MA in Linguistics. She then relocated to London where she earned an MA in Comparative Literature at UCL and studied Classics at King’s College, before returning to UCL for doctoral studies in the Department of Scandinavian Studies. She received her PhD in Translation Studies from UCL in 2015, with a thesis investigating the role and position of translated fiction on the British book market.
Loading...
or
Not Currently Available for Direct Purchase