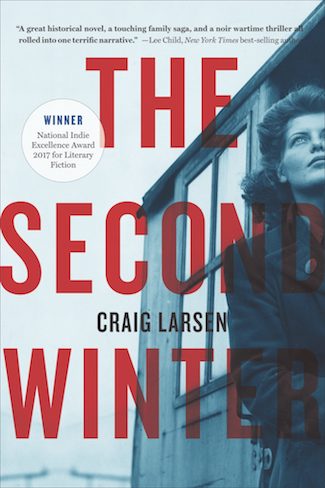 Set in Denmark in the darkest days of World War II, The Second Winter is a cinematic novel that, in its vivid portrayal of a family struggling to survive the German occupation, captures a savage moment in history and exposes the violence and want inherent in a father's love.

It is 1941. In occupied Denmark, an uneasy relationship between the Danish government and the Germans allows the country to function under the protection of Hitler's army, while Danish resistance fighters wage a bloody, covert battle against the Nazis. Fredrik Gregersen, a brutish, tormented caretaker of a small farm in Jutland laboring to keep his son and daughter fed, profits from helping Jewish fugitives cross the border into Sweden. Meanwhile, in Copenhagen, Polina, a young refugee from Krakow, finds herself impressed into prostitution by Germans and Danes alike. When Fredrik steals a precious necklace from a helpless family of Jews, his own family's fate becomes intertwined with Polina's, triggering a ripple effect that will take decades and the fall of the Berlin Wall to culminate.

Craig Larsen was born in 1963 and is a graduate of U.C. Berkeley and Columbia Law School. His first novel, Mania, was published in 2009. A single father, Larsen has lived in New York and Europe. He currently resides in Northern California.

Praise For The Second Winter: A Novel…

"[A] richly narrated story that brings the horrors of the Holocaust and the merciless depravities that accompany war into vivid focus. There is a remarkable cinematic quality to the novel, from the barrenness of Jutland to what remains of the glitter of Copenhagen. An absolute page-turner and a discussion-group leader’s dream.” —Booklist

“The Second Winter captures not the lives of soldiers on the battlefield, but those of simple people living on the edges.” —Foreword Reviews

"The Second Winter by Craig Larsen is a book impossible to put down even when you wish you could.” —New York Journal of Books

“These disparate lives cross in unexpected ways, making the ending satisfying without sacrificing the complexity of characters Larsen has so carefully created. This novel is a fresh approach to the abuses of both the occupier and the occupied in a period of history that continues to surprise us with its dark,dirty secrets.” —Historical Novel Society

“[Larsen] excels at capturing tone and building tension; once you’re into the main plot it’s hard to put the book down. You can practically see the dirt from the sty on Frederik’s clothes, feel the cold driving nails into Oskar’s hands, feel the hot anguish Amalia suffers at the hands of the family’s wealthy landlady as well as in her own home. It’s a time that’s so emotionally charged, but this perspective is different from so many that we see.” — Woman Around Town
or
Not Currently Available for Direct Purchase
Copyright © 2020 American Booksellers Association