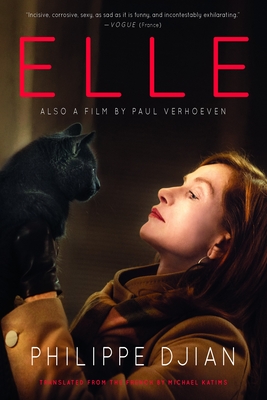 Elle is a psychological thriller that recounts thirty days in the life of its heroine Michèle—powerfully portrayed by Isabelle Huppert in Paul Verhoeven’s award-winning film—where memory, sex, and death collide at every page.

A few weeks before Christmas, Michèle picks herself up from her living room floor. She has been raped. She has almost no recollection of her attacker but she senses his presence—he is never far away—and this uncanny feeling triggers a whirlwind of events and memories. She begins to fear she is losing her grip on a life already complicated by a demanding job, an ex-husband with a new girlfriend, a jealous lover, and a son trapped in a relationship with his girlfriend pregnant by another man.

Hardened by the consequences of her father’s violent past, Michèle—in her fifties, fiercely independent and unsentimental—refuses to be reduced to a victim. When her rapist begins taunting her with messages, she takes measures to protect herself until she discovers his identity…

Through the bitingly sarcastic and unflinchingly realist voice of its heroine, Elle paints a striking portrait of one woman’s experience that challenges our notions of masculinity and femininity, weakness and strength.

Praise For Elle: A Novel…

“I know Djian and he told me as he was writing, he had me in mind.”—Isabelle Huppert, Golden Globe-Winning & Oscar-nominated Actress in an interview with THE GUARDIAN

“I read the book and loved it. I immediately thought there was a good film in the book, and a great role.” —Isabelle Huppert, Golden Globe-Winning & Oscar nominated Actress in an interview with TOWN & COUNTRY

“Like the movie, the book is a harrowing tale.” —SHELF AWARENESS

“Djian’s slim, disturbing novel, already a controversial bestseller in France, is unsparing and fiercely intelligent…Djian’s bold novel, winner of the 2012 Prix Interallié and adapted into an award-winning film directed by Paul Verhoeven, is slight but packs a powerful punch.” —PUBLISHERS WEEKLY, Starred Review

“The book is almost free of chapter breaks, so that events and moods flow into each other without warning or apology. That seemingly superficial stylistic choice is at the heart of the book’s project, which is to free Michèle from whatever thought or reaction she might be expected or obliged to have and then see what happens…As Michèle goes about her daily life and work, she stages various revenge scenes, real and imagined, reflexive and premeditated, that play out more or less as sadomasochistic games…’I’ve known worse with men I freely chose,’ Michèle observes in the book’s opening pages. Things get weirder from there, but even just the acknowledgment of the possibility of such a reaction is quite the statement of intent.” —BOOKFORUM

“Part thriller, part psychological drama with dark humor woven in and out, Elle is a mesmerizing work of contemporary French literature...There are enough twists to keep the reader anxiously anticipating what will happen next...Elle is a unique read for those who are searching for something different.” —UNDERRATED READS

“Djian makes it a bit easy on himself here, disassociating the act from its consequences—if she doesn't remember the actual violation, the 'purely sexual part' it's almost like that didn't happen. The act—or the extension of the act (it gets more complicated, in not being an entirely isolated event) —becomes cathartic, a difficult balancing act…he gives Michèle a strong voice, and the forceful character, independent and empowered, despite her wounds, is impressive , and this makes for a compelling psychological tale (even if not all of it is psychologically entirely convincing). Michèle comes across as raw and penetratingly honest, about both herself and the others, and her attitude is certainly engaging…an absorbing and impressively disturbing read.” —COMPLETE REVIEW

“This is not an apology of rape, far from it. This is not an essay on woman, and their behaviors or reactions when they are confronted with such crime, but the voice of a particular woman, rid of misogynistic clichés in which they are still often locked. No sentimentalization, no victimization, no dependency on men, no blinding maternal feelings... A free woman, therefore a politically incorrect one.” —Les Inrockuptibles

“There is no provocation in this novel, but on the contrary Djian has the ability to show, without ever judging, what are the mechanics of both soul and heart.” —L’Express

“An intoxicating novel for sure.” —Lire

“With Elle, Djian continues to explore the infinite land of language with the burning desire to escape the impotence of a certain type of French novel.”—Marianne

"Of his past, of his experience as a journalist, of his life abroad, of his time today—split between Paris and Biarritz, he speaks little of—his gaze masked by smoked glasses, he describes himself as a failed musician who came to literature through music. Albert Cohen, Bob Dylan are his singing masters, at a time when reading in 1968 was not cool. Djian falls in love with reading and the American novel with Catcher in the Rye followed by Carver, Melville, Miller…”—Marianne

“His writing, simple and vivacious, filled with a violence that threatens to explode at every line creates a double-entry suspense: psychological and romantic.” —Aujourd’hui

“Be aware. This is a literary work, a powerful book, a novel that breaks and enters into forbidden lands.” —Paris Match

“Philippe Djian has the knack to persuade his readers to accept the humanity of the inhuman things he describes, and that pain and pleasure don’t have the same borders as good and evil. But readers don’t have time to think, they have a book to finish. A book that barges in on them until the last chapter. If one thinks that it is the story that gives the speed, one is wrong; it’s the art of writing.” —Le Magazine Littéraire

“Part thriller, part psychological drama with dark humor woven in and out, Elle is a mesmerizing work of contemporary French literature…There are enough twists to keep the reader anxiously anticipating what will happen next…Elle is a unique read for those who are searching for something different.” —UNDERRATED READS

Philippe Djian is the award-winning author of more than twenty novels, including the bestseller 37°2 le matin, published in the United States as Betty Blue. Elle is the fifth of his novels to be adapted into film. A bestseller in France, Elle (Oh!) received the 2012 Prix Interallié.
Loading...
or
Not Currently Available for Direct Purchase