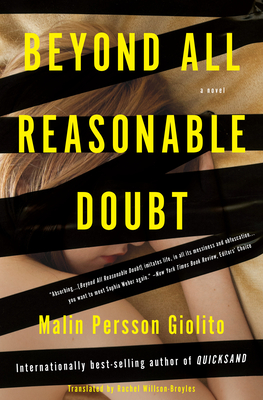 Beyond All Reasonable Doubt

From the award-winning author of Quicksand, a gripping legal thriller that follows one woman’s conflicted efforts to overturn what may be a wrongful conviction.

Thirteen years ago, a fifteen-year-old girl was murdered. Doctor Stig Ahlin was sentenced to life in prison. But no one has forgotten the brutal crime. Ahlin is known as one of the most ruthless criminals.

When Sophia Weber discovers critical flaws in the murder investigation, she decides to help Ahlin. But Sophia doing her utmost to get her client exonerated arouses many people's disgust. And the more she learns, the more difficult her job becomes. What kind of man is her client really? What has he done? And will she ever know the truth?

Praise For Beyond All Reasonable Doubt: A Novel…

“Giolito has come up with another knockout legal thriller…Weber is a wonderfully textured creation, a poignant mix of determined braininess and nagging doubts.” —Washington Post

“Calling all fans of courtroom dramas and Netflix’s shockingly tense show Quicksand: This is the page-turner for you…[a] courtroom drama that will make you question every testimony.” —Refinery29, The Best Beach Reads of Summer 2019

“Since the whole Millennium Trilogy, we’ve been inundated with Scandinavian thrillers of various qualities. This one stands out as something up to par with Larsson. Beyond All Reasonable Doubt is more than a legal thriller, with a search for truth that often can bring disturbing answers.” —Strand Magazine, The Top Twelve Mystery Novels of 2019

“Intriguing…keep[s] the reader guessing right up to the two very different twists that make for a gut-punching finale…[an] insightful look at the subtle variations of guilt…[a] smart, well-written legal and procedural drama.” —Kirkus Reviews (starred review)

“Giolito excels at portraying those accused of horrible crimes…an intricate examination of the psyches of criminals and those who work with them, accompanied by pointed questions about who is served by the justice system…[a] great read.” —Booklist

“Chilling and complex. The truth in this story is a cracked mirror, changing at every angle. Giolito masterfully plumbs the nature of guilt or innocence until no character, nor even the reader, is left unscathed.” —Joanna Schaffhausen, author of The Vanishing Season

“Another breathtaking novel from Malin Persson Giolito! Beyond All Reasonable Doubt masterfully questions the role media and public opinion play in court. A deeply moving suspense novel that zeroes in on humanity’s deepest flaws.” —Viveca Sten, author of In the Heat of the Moment

“This is the evolution of Scandinavian crime, in more ways than one.” —Fredrik Backman, author of A Man Called Ove

“A remarkable new novel...[Giolito] writes with exceptional skill...[Quicksand is] always smart and engrossing...Giolito keeps us guessing a long time and the outcome, when it arrives, is just as it should be.” —Washington Post

“[Quicksand] provides a razor-sharp view of modern Sweden and its criminal justice system, yet is a tonic for readers who have had enough of the brooding, often-bloody 'Scandi-crime' that has been so popular in recent years.” —NPR, Best Books of 2017

Malin Persson Giolito was born in Stockholm in 1969 and grew up in Djursholm, Sweden. She holds a degree in law from Uppsala University and has worked as a lawyer for the biggest law firm in the Nordic region and as an official for the European Commission in Brussels, Belgium. Now a full-time writer, she is the author of four novels including Quicksand, named Best Swedish Crime Novel of the Year and now a Netflix original series. Persson Giolito lives with her husband and three daughters in Brussels.

Rachel Willson-Broyles holds a bachelor’s degree in Scandinavian Studies from Gustavus Adolphus College in St. Peter, Minnesota. She started translating while a graduate student at the University of Wisconsin-Madison, where she received a PhD in Scandinavian Studies in 2013. Her translation of Malin Persson Giolito’s Quicksand was published in 2017. Willson-Broyles lives in St. Paul, Minnesota.
Loading...
or
Not Currently Available for Direct Purchase