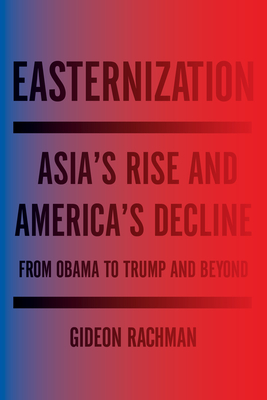 Asia's Rise and America's Decline From Obama to Trump and Beyond

From the winner of the 2016 Orwell Prize and the European Press Prize for Commentator of the Year, a provocative analysis of how a new era of global instability has begun, as the flow of wealth and power turns from West to East.

Easternization is the defining trend of our age — the growing wealth of Asian nations is transforming the international balance of power. This shift to the East is shaping the lives of people all over the world, the fate of nations, and the great questions of war and peace.

A troubled but rising China is now challenging America’s supremacy, and the ambitions of other Asian powers — including Japan, North Korea, India, and Pakistan — have the potential to shake the whole world. Meanwhile the West is struggling with economic malaise and political populism, the Arab world is in turmoil, and Russia longs to reclaim its status as a great power.

As it becomes clear that the West’s historic power and influence is receding, Gideon Rachman offers a road map to the turbulent process that will define the international politics of the twenty-first century.

Praise For Easternization: Asia's Rise and America's Decline From Obama to Trump and Beyond…

“Excellent…A most informative, readable, and interesting piece of work that deserves a wide readership.” —The Guardian

Gideon Rachman is chief foreign affairs commentator for the Financial Times. He joined the FT in 2006, after 15 years at The Economist, where he served as a correspondent in Washington D.C., Brussels, and Bangkok. In 2010 Rachman published his first book, Zero Sum World, which predicted the rise in international political tensions and turmoil that followed the global financial crisis. In 2016, Rachman won the Orwell Prize, Britain’s leading award for political writing. He was also named Commentator of the year at the European Press Prize, known as the “European Pulitzers.”
Loading...
or support indie stores by buying on