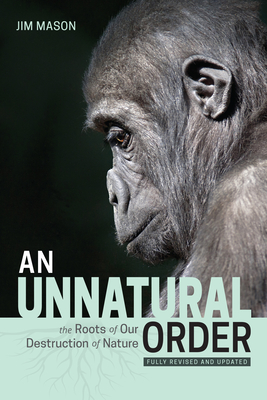 The Roots of Our Destruction of Nature (Fully Revised and Updated)

A fully revised and updated version of the classic work on the origins of animal agriculture and our longstanding contempt for and hatred of nature and animals.

In 1993, Jim Mason, journalist, advocate, and pioneering figure in the contemporary animal advocacy movement, published An Unnatural Order—a sweeping overview of the origins of our hatred and destruction of the natural world and its creatures, from the dawn of agriculture to the present day. Now fully revised and updated to reflect developments in paleoanthropology and ethology, as well as greater awareness of, and urgency regarding, the climate crisis, An Unnatural Order offers an expansive overview of what has changed (both for good and for ill) and what has unfortunately remained the same.

His message is clear: until we grapple with the question of the animal, and our relationship with animality and the natural world, we will not be able to confront the consequences of our perpetuation of environmental destruction, biodiversity collapse, and our alienation from the Earth and one another. As brilliantly polemical and richly descriptive as it was when it was published almost three decades ago, this new version of An Unnatural Order is sure to excite a passionate debate about our role in either saving the ecosystems upon which all species (including our own) rely, or bringing it all to an end.

Jim Mason was trained as a lawyer. He was one of founders and editor of the Animals Agenda magazine, and co-author (with Peter Singer) of Animal Factories (1980) and The Ethics of What We Eat (2006). He has written articles for The New York Times, New Scientist, Newsday, Orion, and Audubon magazine, and has contributed to several anthologies, including In Defense of Animals (2005). He lives in Virginia.
Loading...
or support indie stores by buying on