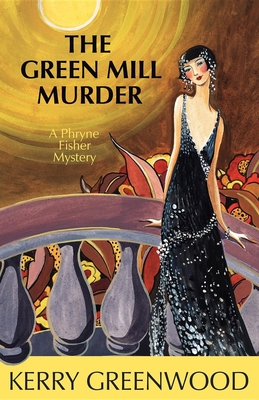 "Anyone who hasn't discovered Phryne Fisher by now should start making up for lost time." —Booklist

Phryne Fisher is doing one of her favorite things—dancing to the music of Tintagel Stone's Jazzmakers at the Green Mill, Melbourne's premier dance hall. And she's wearing a sparkling lobelia-colored georgette dress. Nothing can flap the unflappable Phryne—especially on a dance floor with so many delectable partners. Nothing but death, that is.

The dance competition is trailing into its last hours when suddenly a figure slumps to the ground. Phryne, conscious of how narrowly the weapon missed her own bare shoulder, back, and dress, investigates.

Phryne follows the deadly trail into the dark smoky jazz clubs of Fitzroy, into the arms of eloquent strangers, and finally into the sky, as she uncovers a complicated family tragedy from the Great War and the damaged men who came back from ANZAC cove.

Kerry Greenwood was born in the Melbourne suburb of Footscray and after wandering far and wide, she returned to live there. She has degrees in English and Law from Melbourne University and was admitted to the legal profession on the 1st April 1982, a day which she finds both soothing and significant. Kerry has written three series, a number of plays, including The Troubadours with Stephen D’Arcy, is an award-winning children’s writer and has edited and contributed to several anthologies. The Phryne Fisher series (pronounced Fry-knee, to rhyme with briny) began in 1989 with Cocaine Blues which was a great success. Kerry has written twenty books in this series with no sign yet of Miss Fisher hanging up her pearl-handled pistol. Kerry says that as long as people want to read them, she can keep writing them. In 2003 Kerry won the Lifetime Achievement Award from the Australian Association.