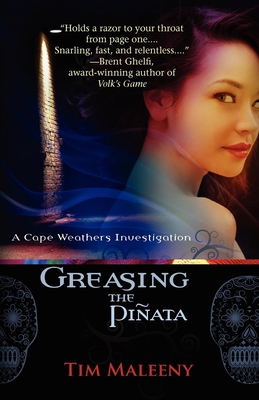 A former U.S. Senator vanishes days after his son goes missing. When theyare both found dead on a golf course, body parts missing, in Mexico, the Senatoras estranged daughter Rebecca resolves to discover what happened.
Private investigator Cape Weathers doesnat really want the case. He canat stand politicians and doesnat know the terrain. But when it looks like the daughter may become the next victim, Cape crosses the border looking for answers.
Cape asks his deadly companion Sally, trained by the Hong Kong Triads, to watch his back as he stumbles onto a conspiracy that leads from corporate boardrooms in San Francisco to strongholds in Mexico. Together they confront a killer determined to bury the past along with anyone trying to dig it up.
Miles away from home and nowhere near finding the answers, Cape manages to get kidnapped, steal from the mob, piss off the DEA, alienate the local police, confound a computer genius, and somehow lose the client heas been protecting all along.
Greasing the PiAata is a novel about family, politics, and the devastating effects of tequila on a private detectiveas investigative abilities. It is the third novel in the Cape Weathers series, and the first to be published in hardcover by Poisoned Pen Press.

TIM MALEENY is the bestselling author of the award-winning Cape Weathers mysteries and the comedic thriller JUMP, which The Boston Globe called "hilarious" and Publishers Weekly described as "a perfectly blended cocktail of escapism." His short fiction appears in several major anthologies and has won the prestigious Macavity Award for best story of the year. A former resident of San Francisco, Tim currently lives and writes at an undisclosed location in New York City, where he is working on his next novel, a screenplay, and a book for young readers.You can contact Tim or find out more about his writing at: timmaleeny.com
or
Not Currently Available for Direct Purchase
Copyright © 2020 American Booksellers Association