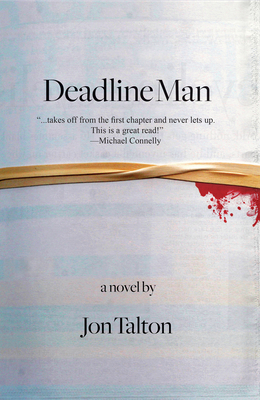 He's a man we know only as the columnist. He writes for a newspaper in Seattle, isn't afraid to stir up trouble, and keeps his life - including his multiple lovers and his past - in safe compartments. But it's all about to be violently upended when he goes out on what seems like the most mundane of assignments, looking into a staid company that never makes news.

The moment one of his sources takes a dive off a downtown skyscraper, the columnist is plunged into a harrowing maze of murder, intrigue, and secrets that powerful forces intend to keep hidden at all costs. All he has to go on is a corporate world where nothing is as it seems, increasingly menacing encounters with mysterious federal agents, and the unsettling meme eleven/eleven.

Meanwhile, the paper itself is dying. So the columnist joins with an aggressive young reporter to see if one explosive story can save a newspaper. Soon they're running to make the deadline of their lives....

"Talton, author of The Pain Nurse (2009) and the David Mapstone series, combines a moving paean to the free press with a chillingly plausible thriller plot built around black ops. A knockout novel that leaves the reader with renewed appreciation for independent daily newspapers."       -- Booklist starred review

"Talton (The Pain Nurse, 2009, etc.) serves up a well-crafted mystery that is also a heartfelt threnody for the journalism that was." -- Kirkus Review

"This terrific stand-alone by the author of The Pain Nurse and the David Mapstone series should appeal to readers who enjoyed Michael Connelly's The Scarecrow."   -- Library Journal

" Deadline Man is one of the best suspense novels I've read in a while. Full of twists, turns, murder and mayhem, Deadline Man kept me anxiously turning pages right up to the end. Talton does a magnificent job of planting hints and teasers that keep readers guessing at what might happen. but he neither tips his hand completely nor leaves his readers in the dark...Talton is one of the best talents I've encountered this year. The Bottom Line: Fans of well-written suspense should not miss Deadline Man."    - - Midwest Book Review

Jon Talton is a fourth-generation Arizonan and the author of the David Mapstone mysteries, "Concrete Desert, Cactus Heart, Camelback Falls, Dry Heat" and "Arizona Dreams." The "Washington Post "has lauded Talton as a strong new voice in contemporary hardboiled fiction. "Dry Heat" won the Arizona Highways Fiction Award in 2005. "Arizona Dreams" was a BookSense Pick. Jon s writing was developed over 20 years as a journalist, working for newspapers in San Diego, Denver, Dayton, Cincinnati and Charlotte. Jon s columns have appeared in newspapers throughout North America. In 2001, he returned to Phoenix as a columnist for the Arizona Republic. Before journalism, Jon worked as an ambulance medic in the inner city of Phoenix. He now lives in Seattle, Washington."
Loading...
or
Not Currently Available for Direct Purchase