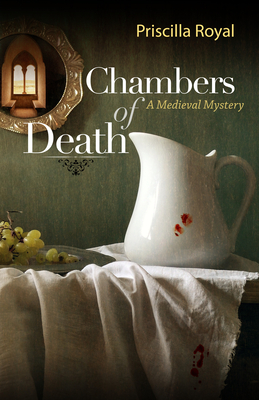 When one of her company falls ill on a return journey to Tyndal, Prioress Eleanor accepts lodging at a nearby manor. Master Stevyn's wife is having an affair with the groom while a local widow acts more the lady of the manor than the lady herself. His eldest son and spouse are obsessed with sin and heaven while his youngest son, bound for the Church, unexpectedly returns with more interest in lute playing than the priesthood. It is no surprise when someone's throat is cut, but the sheriff does all he can to avoid offending the family rather than seeking the real killer. When he arrests a servant, she herself is stabbed before she can either prove innocence or be taken off for hanging. Will Eleanor discover the dark secrets that have led to this string of killings before the murderer strikes again?

Priscilla Royal grew up in British Columbia and has a degree in world literature from San Francisco State University, where she discovered the beauty of medieval literature. Until recently, she worked for the Federal government in a variety of positions, all of which provided a wonderful education in the complexity of human experience and motivation. She is a theater fan as well as reader of history, mysteries, and fiction of lesser violence. She now lives in Northern California and belongs to the Mystery Writers of America, California Writers Club and Sisters in Crime.
Loading...
or
Not Currently Available for Direct Purchase