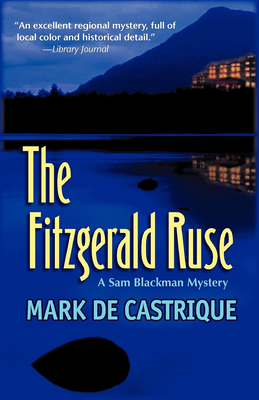 Former Chief Warrant Officer Sam Blackman lost a leg in Iraq and emerged from the V.A. hospital in Asheville, NC, as a bitter civilian without a job or a future. But when he solved a series of local murders, Sam found new meaning for his life. Now he and his partner, Nakayla Robertson, are opening a detective agency. They have high hopes that the thriving mountain region will provide a steady stream of cases.

Their first client, a quirky elderly woman in a retirement community, makes a strange request. She wants Sam to right a wrong she committed more than 70 years ago. Her victim: F. Scott Fitzgerald. Her crime: stealing a manuscript. Sam's task seems simple enough: retrieve the woman's lockbox and deliver the manuscript to Fitzgerald's heirs.

But nothing is simple for Sam. The lockbox is sealed with a swastika, a symbol his client insists predates the Nazis and reflects a scene from The Great Gatsby. Then a security guard is killed and the lockbox disappears. Not only has this investigation triggered a murder, but Sam's final military case has followed him from Iraq and neither he nor anyone close to him is safe....

“Readers will hope to see a lot more of the book’s amiable characters, in particular, Sam and Nakayla, whose comfortable banter lends the story much of its charm.” –Publishers Weekly on The Fitzgerald Ruse   “An excellent regional mystery, full of local color and historical detail.” Library Journal on The Fitzgerald Ruse   STARRED REVIEW "A wealth of historical detail, an exciting treasure hunt and credible characters distinguish this fresh, adventurous read.” –Publishers Weekly on Blackman's Coffin