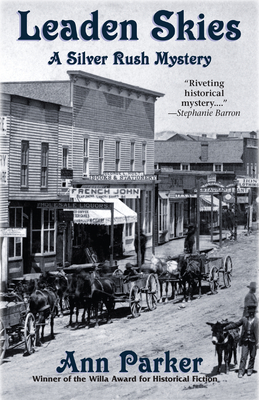 "Parker is proficient in showing the crossroads between civilization and the frontier, including emerging new roles for women. A cliffhanger ending sets a promising stage for the next installment."--Publishers Weekly

It's the summer of 1880, and potential investment in Leadville's silver mines has brought former president and Civil War general Ulysses S. Grant to this city at the top of the Rockies. But others in his retinue and in town have different agendas. Political aspirations fuel the dreams of young John Quincy Adams Wesley and his mother, while itinerant fire insurance mapmaker Cecil Farnesworth struggles against the seductive call of Leadville's red-light district.

As part owner of the Silver Queen Saloon, Inez Stannert has often observed the ruination that comes from yielding to temptation. Still, that hasn't stopped her from taking Reverend Justice Sands as her lover. Nor does it stop her from striking a backroom deal with upscale brothel madam Frisco Flo that Inez gambles will make her financially independent.

But when the body of one of Flo's women is discovered and Inez learns that Flo has another silent business partner whose identity she will not divulge, Inez begins to have second thoughts. In a race to untangle the dealings of the high and the low during Grant's visit, Inez finds herself facing demons from her past, even as she fights to save her reputation and her life.