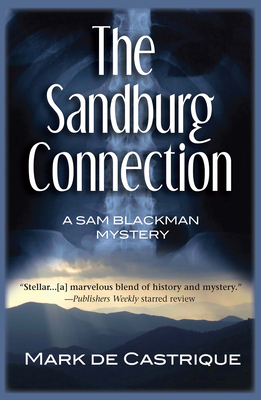 It should have been routine, a simple assignment for PI Sam Blackman and his partner Nakayla Robertson. Follow a history professor who's suing a spinal surgeon for malpractice and catch her in physical activities that undercut her claim.

When professor Janice Wainwright visits Connemara, Carl Sandburg's home in Flat Rock, N.C., and climbs the arduous trail to the top of Glassy Mountain, Sam believes he has the evidence needed to expose her - until he finds the woman semiconscious and bleeding on the mountain's granite outcropping. Her final words: "It's the Sandburg verses. The Sandburg verses."

As the person to discover the dying woman, Sam becomes the first suspect. An autopsy reveals painkillers in her blood and solid proof of the surgeon's errors. Why did this suffering woman attempt to climb the mountain? Did she stumble and fall? Did someone cause her death?

A break-in at the Wainwright farmhouse and the theft of Sandburg volumes convince Sam someone is seeking potentially deadly information. But what did Pulitzer Prize winner Sandburg have in his literary collection that inspires multiple murders? And who will be targeted next?

Mark de Castrique grew up in the mountains of western North Carolina where many of his novels are set. He's a veteran of the television and film production industry, has served as an adjunct professor at the University of North Carolina at Charlotte teaching The American Mystery, and he's a frequent speaker and workshop leader. He and his wife, Linda, live in Charlotte, North Carolina. www.markdecastrique.com

"A missing folk song, a buried treasure from Civil War days, and a pregnant goat all play a part in this marvelous blend of history and mystery seasoned with information about Carl Sandburg's life and times on his Asheville farm and the National Park Service's current operations there. This strong regional mystery should resonate with a much wider audience." —Publishers Weekly starred review

"Known for his effortless storytelling, de Castrique once again delivers a compelling tale blending fact and fiction, this one involving racial tension, the aftermath of war, and the authentication of manuscripts." —Library Journal starred review of Blackman's Coffin

"The warmth of Sam and Nakayla's relationship and Sam's challenged but determined heart make for a great read." —Kirkus Reviews of Fitzgerald Ruse