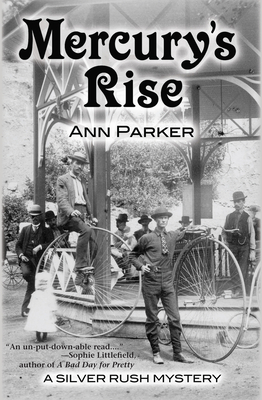 It is summer 1880, and Inez Stannert, one of the partners in the Silver Queen Saloon in Leadville, Colorado, travels with her photographer friend Susan to the fashionable summer retreat of Manitou for a reunion with her son, now a toddler in the care of her sister. On the way, fellow stagecoach passenger Edward Pace suddenly grows faint, swigs some medicine, and dies under their horrified gaze. Pace's widow rejects a weak heart theory and begs Inez to investigate. As Inez digs deeper, she uncovers the shady side of spa tourism including spurious claims, profiteering from the coming bonanza in medicinal waters and miracle cures, and medical practitioners who kindle false hopes in the desperate and the dying. Then Inez's husband Mark reappears after a year and a half's unexplained absence. Now she must fight to hold on to her child and the life she has built for herself in an era where "independent woman" is an oxymoron.

"A single page of Ann Parker’s Mercury's Rise reminds the reader why her novels are held in such high regard: her command of historical detail is matched only by her deft pacing and irresistible characters. Parker’s language is perfectly pitched, and the dialog sets the tone without ever jarring contemporary ears. In this latest installment, Parker puts series protagonist Inez Stannert in an impossible situation, then dials up the stakes, making for an un-put-down-able read. New characters intrigue and charm, and those returning –in one case, in a most unwelcome fashion– add their own complications to Inez’s plight. Her feistiness is underscored by unswerving courage and balanced by dignity, and it is impossible not to root passionately for this fiercely independent woman." —Sophie Littlefield, author of A Bad Day for Pretty and A Bad Day for Scandal

"A cliffhanger ending sets a promising stage for the next installment." —Publishers Weekly of Leaden Skies

Silver Lies was the winner of the Willa Cather Award for Historical Fiction and Colorado Gold Award for Best Mystery.

"A dazzling amount of historical detail is woven in yet never overpowers this story of deceit and greed. Laden with intrigue, this will also appeal to readers of historical Westerns. Parker’s depth of knowledge coupled with an all-too-human cast leaves us eager to see what Inez will do next. Encore!" —Library Journal of Mercury's Rise

"Parker smoothly mixes the personal dramas and the detection in an installment that’s an easy jumping-on point for newcomers." —Publisher's Weekly of Mercury's Rise

Ann Parker is the author of the award-winning Silver Rush historical mystery series set in 1880s Colorado, featuring saloon-owner Inez Stannert. Books in the series include "Silver Lies," "Iron Ties," "Leaden Skies" and this, the latest, "Mercury's Rise." A science writer by day, Ann lives in the San Francisco Bay Area and is a member of Mystery Writers of America and Women Writing the West."
or
Not Currently Available for Direct Purchase