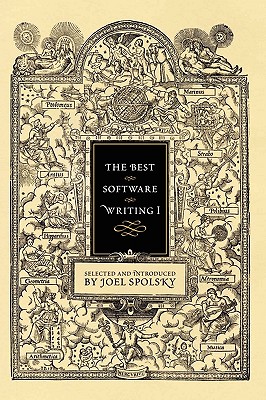 The Best Software Writing I (Paperback)

Selected and Introduced by Joel Spolsky

Frustrated by the lack of well-written essays on software engineering, Joel Spolsky (of www.joelonsoftware.com fame) has put together a collection of his favorite writings on the topic.

With a nod to both the serious and funny sides of technical writing, The Best Software Writing I: Selected and Introduced by Joel Spolsky is an entertaining read and a guide to the technical writing literati.

The Best Software Writing I contains writings from:

Joel Spolsky is a globally recognized expert on the software development process. His web site Joel on Software (JoelonSoftware.com) is popular with software developers around the world and has been translated into over 30 languages. As the founder of Fog Creek Software in New York City, he created FogBugz, a popular project management system for software teams. Joel has worked at Microsoft, where he designed Visual Basic for Applications as a member of the Excel team, and at Juno Online Services, developing an Internet client used by millions. He has written two books: User Interface Design for Programmers (Apress, 2001) and Joel on Software (Apress, 2004). Joel holds a bachelor's of science degree in computer science from Yale University. Before college, he served in the Israeli Defense Forces as a paratrooper, and he was one of the founders of Kibbutz Hanaton.
or support indie stores by buying on
Copyright © 2020 American Booksellers Association