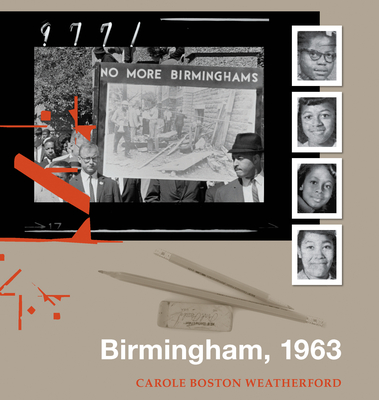 A poetic tribute to the victims of the racially motivated church bombing that served as a seminal event in the struggle for civil rights. In 1963, the eyes of the world were on Birmingham, Alabama, a flashpoint for the civil rights movement. Birmingham was one of the most segregated cities in the United States. Civil rights demonstrators were met with police dogs and water cannons. On Sunday, September 15, 1963, members of the Ku Klux Klan planted sticks of dynamite at the Sixteenth Street Baptist Church, which served as a meeting place for civil rights organizers. The explosion killed four little girls. Their murders shocked the nation and turned the tide in the struggle for equality. A Jane Addams Children's Honor Book, here is a book that captures the heartbreak of that day, as seen through the eyes of a fictional witness. Archival photographs with poignant text written in free verse offer a powerful tribute to the young victims.

★ "A gorgeous memorial to the four killed on that horrible day, and to the thousands of children who braved violence to help change the world." --Kirkus Reviews, starred review

★ "Filled with emotion. . . . This is a book that should be in every library collection." --Library Media Connection, starred review

★ "An intimate experience. . . . An emotional read, made even more accessible and powerful by the viewpoint of the child narrator." --School Library Journal, starred review