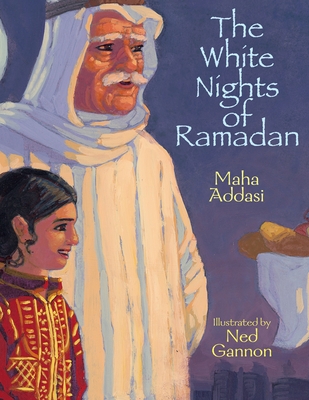 The White Nights of Ramadan (Hardcover)

This picture book for young readers shows how a young girl named Noor, who lives with her family in Kuwait, prepares for the Muslim festival known as Girgian along with her family.

Mid-Ramadan is a special time for families in the Arabian (Persian) Gulf. These middle days are known as "the three whites," because they include the day of the full moon, the day before, and the day after. It's a time when children, dressed in traditional clothes, go from house to house collecting treats from their neighbors. When Noor sees the full moon rising, signaling the coming of Girgian, she and her brothers prepare for the fun. Together, they decorate the bags they'll carry to collect the candies. But along with the fun, Noor remembers the true meaning of Ramadan: spending time with family and sharing with those less fortunate.

Maha Addasi was born and grew up in Kuwait. A graduate of Butler University in Indiana, she worked in public relations for the Noor Al Hussein Foundation, directed by Queen Noor of Jordan. She was a news correspondent and producer for the English-language channels of Jordan Television and Dubai Television. She lives in Fairfax, Virginia.

Ned Gannon is a painter, an illustrator, and a writer. He attended the Kansas City Art Institute and received an MFA degree from the School of Visual Arts in New York. His work has appeared in New York galleries, in the Society of Illustrators, and in Communication Arts. He lives and teaches in Eau Claire, Wisconsin.

Praise For The White Nights of Ramadan…

"An excellent choice for units on diversity and multiculturalism." --School Library Journal
or
Not Currently Available for Direct Purchase
Copyright © 2020 American Booksellers Association