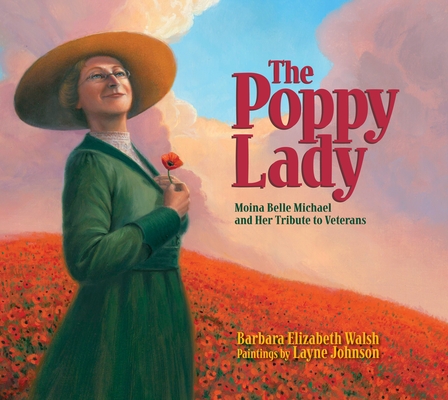 Moina Belle Michael and Her Tribute to Veterans

Here is the inspiring story behind the Veterans Day red poppy, a symbol that honors the service and sacrifices of our veterans.

When American soldiers entered World War I, Moina Belle Michael, a schoolteacher from Georgia, knew she had to act. Some of the soldiers were her students and friends. Almost single-handedly, Moina worked to establish the red poppy as the symbol to honor and remember soldiers. And she devoted the rest of her life to making sure the symbol would last forever. Thanks to her hard work, that symbol remains strong today. Author Barbara Elizabeth Walsh and artist Layne Johnson worked with experts, primary documents, and Moina's great-nieces to better understand Moina's determination to honor the war veterans.

A portion of the book's proceeds will support the National Military Family Association's Operation Purple®, which benefits children of the U.S. military.

Praise For The Poppy Lady: Moina Belle Michael and Her Tribute to Veterans…

Barbara Elizabeth Walsh has fond memories of poppies and parades honoring her father and other veterans. During World War II her father knew Moina Michael, the Poppy Lady. A former elementary-school teacher, Barbara has written articles for Highlights for Children and Cricket. The Poppy Lady is her first children's book. She and her husband live in Mantoloking, New Jersey, and Key Largo, Florida.

Layne Johnson has created art for more than twenty books for children, including the Western Heritage Award-winning Off Like the Wind!: The First Ride of the Pony Express (by Michael P. Spradlin) and the acclaimed Farmer George Plants a Nation (by Peggy Thomas), a picture book biography of George Washington's life as a farmer, inventor, and scientist. Mr. Johnson speaks frequently in schools and libraries and enjoys traveling to historic sites. He lives in Texas with his wife. Visit www.laynejohnson.com.
Loading...
or support indie stores by buying on