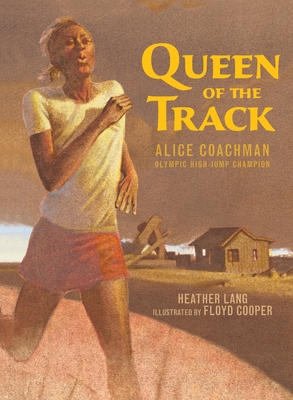 Queen of the Track

Here is a story of Alice Coachman, the first African-American woman to win an Olympic gold medal.

When Alice Coachman was a girl, most White people wouldn't even shake her hand. Yet when the King of England placed an Olympic medal around her neck in 1948, he extended his hand to Alice in congratulations. Standing on a podium in London's Wembley Stadium, Alice was a long way from the fields of Georgia where she ran barefoot as a child. With a record-breaking leap, she had become the first African-American woman to win an Olympic gold medal. This inspirational picture book is perfect to celebrate Women's History Month or to share any day of the year.

"Lang brings her subject's early years to life through small details. . . . Cooper's pastels keep to a brown, grainy palette, recalling the Georgia dirt on which the track star ran as a child." —School Library Journal

"From the hardships of her Georgia childhood through the 1948 London Olympics at which she won gold and became a legend, this biography stands out for the lesser-known details it includes (e.g. Coachman's dance performance aboard the London-bound ship). Cooper's grainy sepia-hued pastels are striking; endnotes with more about Coachman and the historic 1948 Olympics support the thorough text." —The Horn Book

Heather Lang, a former public-health attorney, was inspired by Alice Coachman's indomitable spirit. This is her first picture book. She lives in Lexington, Massachusetts. Visit heatherlang.com.


Floyd Cooper (1956–2021) illustrated over 110 books for children, including Unspeakable: The Tulsa Race Massacre by Carole Boston Weatherford, for which he was awarded a Caldecott Honor, the Coretta Scott King Illustrator Award, and a Sibert Honor. He was also the recipient of the Coretta Scott King Award for The Blacker the Berry; three Coretta Scott King Honors for I Have Heard of a Land, Meet Danitra Brown, and Brown Honey in Broomwheat Tea; 10 ALA Notables; and an NAACP Image Award, among other honors. Visit floydcooper.com.
Loading...
or support indie stores by buying on
(This book is on backorder)