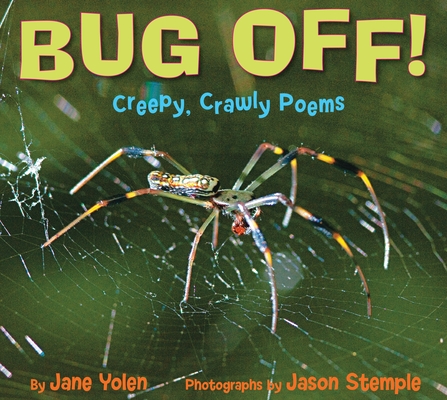 In Bug Off! readers meet thirteen bugs in playful, humorous poems and startling, intimate photographs. Nonfiction prose paragraphs broaden the perspective: Children will learn how bees make honey, that many butterflies can taste food with their feet, that lovebugs can fly higher than the Empire State Building, and much more. The subjects will be familiar to kids—a fly, praying mantis, honeybee, butterfly, daddy longlegs, lovebug, dragonfly, tick, ladybug, spider, grasshopper, ants, and a swarm of bugs—but the poems, photographs, and nonfiction passages present them in eye-opening new ways. Includes an author's note that encourages readers to write their own bug poems.

"Stemple's photographs are the true stars of this book. His macro views show such details as the rainbow colorations on a fly's wings, the serrations on a grasshopper's rear legs and the many units that make up the lovebug's compound eyes." --Kirkus Reviews

Jane Yolen has received many awards, including both the Kerlan Award and the Regina Medal for the body of her work. She lives in Hatfield, Massachusetts, and St. Andrews, Scotland.

Jason Stemple is a freelance photographer who has collaborated with Jane Yolen on many books, including A Mirror to Nature, winner of the John Burroughs Young Readers Award, and Wild Wings, winner of the National Outdoor Book Award. He lives in Charleston, South Carolina.
Loading...
or support indie stores by buying on