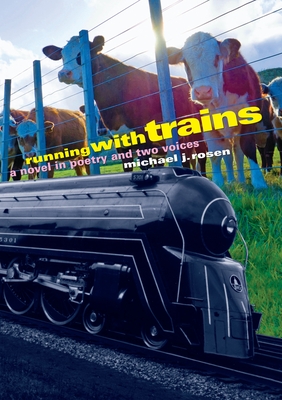 A Novel in Poetry and Two Voices

Is the grass greener on the other side of the train window? Even a brief brush with a stranger can change our lives. It's 1970, and Perry feels adrift in turbulent times: his father is missing in action in Vietnam, his mother is studying to become a nurse in the city, his older sister has become a peacenik in college. Traveling between his hometown, where he lives with his grandmother, and his mother's house in Cincinnati, Perry notices Steve, whose farm lies on the B&O railroad line. Steve likes to race the train as it blows by his fields; Steve skillfully sends his collie after an escaped cow; Steve watches the Cincinnatian, longing for its speed, longing for adventure. In alternating voices, Michael J. Rosen's poems weave a tale of two boys—one wishing for the stability of home, the other yearning to travel—and the unexpected impact of their fleeting encounter.

Praise For Running with Trains: A Novel in Poetry and Two Voices…

"A thoughtful, beautifully image-laden tale of learning how to appreciate what one has." &#8212;Kirkus Reviews

"(A)n introspective, quiet portrait of two boys on the brink of young adulthood. Rosen delivers well-crafted verse and plays with a few different poetic forms to paint a vivid portrait of the Ohio landscape, but as the plot ultimately goes little further than that described, the book will likely struggle to find an audience." &#8212;School Library Journal

Michael J. Rosen earned an MFA in poetry from Columbia University. His many books for children include The Cuckoo's Haiku, which was a Kirkus Best Book, a VOYA Poetry Pick of 2009, and was named to the NCTE's list of 20 Notable Poetry Books of 2009. He lives in Glenford, Ohio.
Loading...
or
Not Currently Available for Direct Purchase