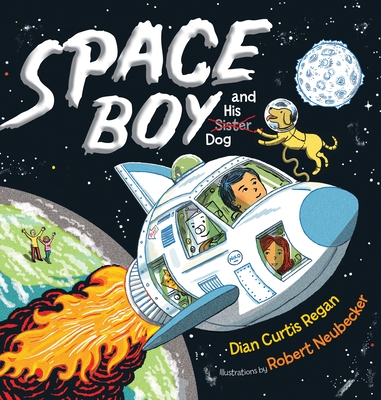 Space Boy and His Dog

Niko may live on boring old Earth with his family, but he's always finding a new adventure. Using the spaceship that he built from a box in his backyard and a little imagination, he flies off into space with his robot, Radar, and his dog, Tag. The only one NOT invited is his sister Posh who keeps trying to insert herself into Niko's story. In this first mission, Niko and crew (and maybe also pesky Posh) fly to the moon in search of a lost cat. Illustrated in comic–book style and featuring easy–to–read text packed with humor, Space Boy and His Dog is Niko's first adventure, with two more books planned in the series.

Praise For Space Boy and His Dog…

Niko has an impressive space fantasy going, aided by a tricked-out cardboard-box rocket ship, his dog, his trusty robot toy, and Neubecker's vivid, comically earnest cartooning. But his sister, Posh, keeps trying to hijack the narration, despite Niko's admonition that 'She is not in this story.' . . . Regan (Barnyard Slam) takes readers inside the head of a very imaginative child, honoring Niko's desire to control his story while affectionately spoofing it. It's a funny and fresh spin on sibling conflict . . .' &#8212;Publishers Weekly

The text is clear and the narration concise. . . . A good read-aloud to highlight strong female characters and discuss sibling rivalries.' &#8212;School Library Journal

Dian Curtis Regan is the author of the bestselling PRINCESS NEVERMORE and many books for young readers, ranging from picture books to young adult novels. Her books have received many honors, including Best Books for Young Adults and Children's Choice Awards citations.