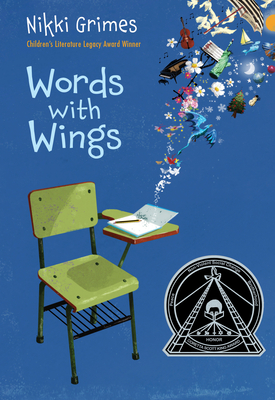 In this Coretta Scott King Author Honor Book, Children's Literature Legacy Award-winner Nikki Grimes explores though her celebrated poetry how a supportive teacher can be the key to unlocking a dreamer's imaginative power through creative writing.

Gabby's world is filled with daydreams. However, what began as an escape from her parents' arguments has now taken over her life. But with the help of a new teacher, 'Gabby the dreamer' might just become 'Gabby the writer' and the words that once carried her away might allow her to soar. Written in vivid, accessible poems, this remarkable verse novel is a celebration of imagination, of friendship, of one girl's indomitable spirit, and of a teacher's ability to reach out and change a life.

Praise For Words with Wings…

★ ". . . Grimes has written a novel in verse that is an enthusiastic celebration of the power of words and imagination. . . Always accessible, Grimes' language is vivid, rhythmic, and figurative. . . Grimes' words speak to the daydreamer in every reader." — Booklist, starred review

★ "In this delightfully spare narrative in verse, Coretta Scott King Award-winning Grimes examines a marriage's end from the perspective of a child. . . Throughout this finely wrought narrative, Grimes' free verse is tight, with perfect breaks of line and effortless shifts from reality to dream states and back. An inspirational exploration of caring among parent, teacher and child--one of Grimes' best." —Kirkus Reviews, starred review

" . . . Grimes packs substantial emotional heft into her poems, especially the way that Gabby's parents' separation weighs on her. . . her poems lovingly convey the rich inner life (and turmoil) of a girl in the process of finding her voice." —Publishers Weekly

New York Times bestselling author Nikki Grimes is the recipient of the Coretta Scott King-Virginia Hamilton Award for Lifetime Achievement, the ALA Children’s Literature Legacy Award, and the NCTE Award for Excellence in Poetry for Children. Her books include her critically acclaimed memoir in verse Ordinary Hazards as well as picture books Kamala Harris: Rooted in Justice and Barack Obama: Son of Promise, Child of Hope. She won the Coretta Scott King Award for Bronx Masquerade and earned a Coretta Scott King Author Honor five times—for Words with Wings, Jazmin's Notebook, Dark Sons, Talkin’ About Bessie, and The Road to Paris. Visit nikkigrimes.com
Loading...
or support indie stores by buying on