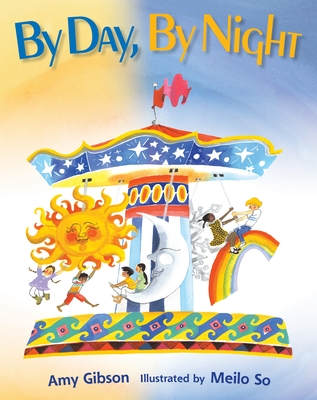 By Day, By Night

This lyrical ode to humanity celebrates people all around the world as they do the same things in different ways, from morning to night: as we're carried first, then toddle, then walk; as we learn to read and explore new worlds; as we wish or dream, laugh or cry, or even wonder why. This universal picture book is as profound as it is simple. A beautiful sentiment to share at story time or bedtime, this book will touch children and adults alike.

Praise For By Day, By Night…

" . . . Globalism is the continued theme as So's lively pencil-and-watercolor vignettes show children from many countries engaged in typical activities . . . Delightfully free and imaginative, So's illustrations convey the global message in great depth, accompanied by Gibson's simple rhyming text. . . This unusual picture book will spark many questions from young children about the customs and lifestyles of their peers all over the globe." --Kirkus Reviews

Amy Gibson is the author of three picture books: Around the World on Eighty Legs—a collection of animal poems; Split! Splat!—a young, rhythmic picture book; and Catching Kisses, a lyrical picture book about blowing and catching kisses. She wrote By Day, By Night after seeing a documentary about children orphaned by AIDS in Africa; she sees it as "a book about the children of the world for the children of the world." She was an elementary school teacher before she became a writer. She lives with her husband and three children in Los Gatos, California. amygibson.com.

Meilo So was born in Hong Kong and studied in the United Kingdom, where she graduated from Brighton College of Art. She has illustrated many picture books, including perennial favorite The 20th Century Children's Poetry Treasury selected by Jack Prelutsky and Water Sings Blue by Kate Coombs, which received four starred reviews and won the 2013 Lee Bennett Hopkins Poetry Award. She lives in the Shetland Isles. meiloso.com.
Loading...
or
Not Currently Available for Direct Purchase