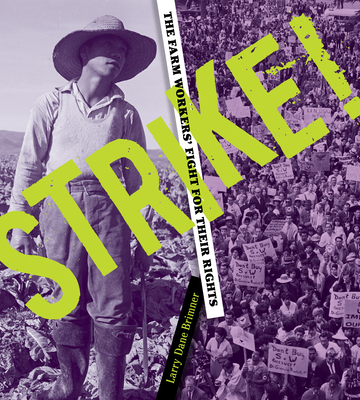 The Farm Workers' Fight for Their Rights

Here is the gripping story of the Grape Strike that stirred a nation, as well as the rise of Latino civil rights activist César Chávez and the United Farm Workers of America.

In the 1960’s, while the United States was at war and racial tensions were boiling over, Filipino-American workers were demanding fair wages and decent living conditions in California’s vineyards.  When the workers walked off the fields in September 1965, the great Delano grape strike began.  Did the signing of labor contracts with growers in 1970 mean an end to the problems of the American field laborers, or was it a short-lived truce? This nonfiction book for young readers follows the five-year long strike and also provides details about César Chávez and the United Farm Workers.  Award-winning author Larry Dane Brimner’s riveting text, complemented by black-and-white archival photographs and the words of workers, organizers, and growers, tells the powerful history.

Praise For Strike!: The Farm Workers' Fight for Their Rights…

★ "A skillful, compelling account of the complicated history of Cesar Chavez and the farm workers movement, set in the context of the social and political tensions of the times . . . With an appealing design and many black-and-white photographs, this paints a vivid, detailed picture of an important labor movement and its controversial yet inspiring leader." -- Kirkus Reviews, starred review

★ "Brimner's comprehensive history of the United Farm Workers (UFW) begins not with Cesar Chavez but with the action of a group of Filipino farm workers who walked off the California fields in 1965. He combines the little-known story of the Filipino workers, a significant segment of migrant farm workers, with that of Chavez and the Hispanic workers, whose actions have received far more attention . . . Brimner's inclusion of information about the Filipino workers who began the movement, quotes and balanced discussion of Chavez's strengths and weaknesses provides a fresh perspective on the movement, making this book a first-purchase choice for middle-level researchers." -- School Library Journal, starred review

" . . . Brimner's compelling narrative, complete with both textual and visual primary sources, is up to the task. The layout is inviting with swatches of green and purple to complement the dominant black-and-white color scheme and well-placed maps and photos, while brief Spanish translations of selected quotes, titles, and epigraphs are incorporated . . . " -- The Horn Book

Larry Dane Brimner is the recipient of the 2018 Robert F. Sibert Award for the most distinguished informational book for children for his title Twelve Days in May: Freedom Ride 1961. He is known for his well-researched, innovative, and award-winning nonfiction for young readers, and is the author of multiple acclaimed civil rights titles, including Strike!: The Farm Workers' Fight for Their Rights; and Black & White: The Confrontation between Reverend Fred L. Shuttlesworth and Eugene "Bull" Connor.
Loading...
or support indie stores by buying on