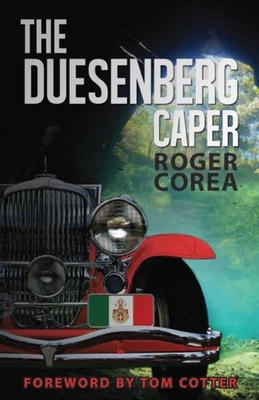 A vacation in Sicily turns deadly when young schoolteachers Andrew and his wife Ada find themselves commissioned to solve one the oldest mysteries in the car world. The whereabouts of the priceless 1935 Duesenberg SJ Emmanuel owned by King Victor Emmanuel of Italy has remained undiscovered for decades. Hot on its trail, Andrew and Ada are drawn into a world of high-stakes intrigue. Following the clues along a path of potential landmines, they become immersed in the dangerous landscape of Sicily’s mafia. In a land of high-rollers where the money flows, Andrew and the feisty Ada must contend with a series of riddles, risky complications, and the most notorious crime boss in Sicily.

Classic car enthusiasts rejoice—The Duesenberg Caper is lush with the rarest and costliest cars money can’t buy. Roger Corea delves into a wealth of loving detail only a true aficionado could deliver. Shrouded in enigma, his intoxicating Sicilian countryside is a catalyst for this electrifying thriller to unfold.

Roger Corea writes about things, people, and places he is passionate about. His first novel, Scarback, published in 2013, tells the story of a critical time in the life of a mentally challenged man from the Italian neighborhood of Roger's youth.

Writing is a natural outgrowth of Roger’s formal education. He earned a bachelor’s degree in English from St. Bonaventure University and completed graduate work in English literature at the University of Rochester. Before entering the business world to work for a large financial services company, Roger taught English literature at Canandaigua Academy and Penfield High School, where he also served as assistant football coach.

Roger lives with his wife, Mary Ann, in Penfield, New York. They have three children and three grandchildren.

A former contributor to Road & Track and The New York Times, Tom Cotter is the author of twelve bestselling automotive books, including seven about automotive archeology, such as The Cobra in the Barn and The Corvette in the Barn. His most recent book, 50 Shades of Rust: Barn Finds You Wish You’d Discovered, is already a best seller. He also is the co-author of an award-winning history of the legendary race team Holman-Moody. Before focusing on writing, Cotter built one of the most successful PR agencies in motorsports with clients in NASCAR, Formula One, Indycar, road racing, drag racing, and motorcycle racing. He formerly served as co-chairman of the Amelia Island Concours d’Elegance and lives in Davidson, North Carolina.


Praise For The Duesenberg Caper…

“You’ll need to buckle your seatbelt before you start to read this, and you won’t be able to unbuckle until you’ve finished.” — Keith Martin, Publisher, Sports Car Market Magazine

“There is nothing that suits my heart more than a story about a lost Duesenberg!” — Randy Ema, Duesenberg Restoration Specialist

“I was impressed with the descriptions of the automobiles. The SJ Duesenberg specs were accurate, as were the other autos described in the ‘dream collection.’” — Skip Marketti, Chief Curator, The Nethercutt Collection

“These automobiles are the epitome of beauty, design, class and craftsmanship. Bringing them together in a tale of mystery and intrigue brings them to life!” — Laura Brinkman, Executive Director/CEO, Auburn Cord Duesenberg Museum

“The Duesenberg Caper is a riveting thriller. With classic cars as a lifelong passion, I became completely immersed in the drama.” — Robert Pass, avid classic car collector

“I can’t remember when I’ve read a more exciting novel, as well as learning so much about the most valuable cars in the world.” — Frank Mazzarella, avid classic car collector

“A thrilling, provocative novel which captured my fascination from start to finish,  and I was caught completely off guard by the incredible ending.” — Richard Rice, avid classic car collector

“I found The Duesenberg Caper to be so thoroughly enjoyable that I finished the nearly 300-page pre-release book in less than 24 hours.” — Robert Tobin, avid classic car collector

“What a thrill to read! Hilarious yet scary enough to keep you reading—and the ending will knock you on your butt.”  — Vivian Probst, author of Death by Roses