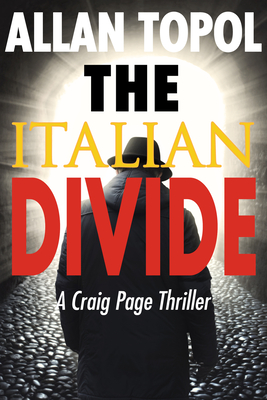 When prominent Italian banker Frederico Castiglione is murdered in an apparent jewelry robbery gone wrong, things are not what they seem. Former CIA Director Craig Page is enjoying his new life as Italian race car driver Enrico Marino—but when he hears that his friend and sponsor has been found dead, he suspects foul play. Shortly after Castiglione’s death, Italian banker Andrew Goldoni is asked to sell—or else. When he refuses, his daughter goes missing.

Craig embarks on an investigation to solve the riddles underlying Castiglione’s murder and rescue Goldoni’s daughter, but the pieces don’t quite fit. The murderers are Russian, but the takeovers are based in China, and somehow Roberto Parelli, the Italian separatist candidate for President, is involved.

With the help of Elizabeth Crowder, CIA director Betty Richards, and director of EU Counter Terrorism Giuseppe, Craig discovers a complicated web of mysterious political and financial takeovers across Italy, all linked back to Craig’s sworn enemy, Zhou Yun, and Roberto Parelli.

In The Italian Divide loyalties lie deep, dangerous alliances are made to be broken, and organized crime is omnipotent. Allan Topol’s latest Craig Page thriller is an electrifying foray into the world of international intrigue. Against blackmail, extortion, and treason, can Craig Page still prevail?

Allan Topol is the national bestselling author of nine novels of international intrigue, including Spy Dance. His novels have been translated into Chinese, Japanese, Portuguese, and Hebrew. He is a graduate of Carnegie Institute of Technology, who majored in chemistry, abandoned science, and obtained a law degree from Yale University. A partner in a major Washington law firm, and an avid wine collector, he has traveled extensively, researching dramatic locations for his novels.
Loading...
or
Not Currently Available for Direct Purchase