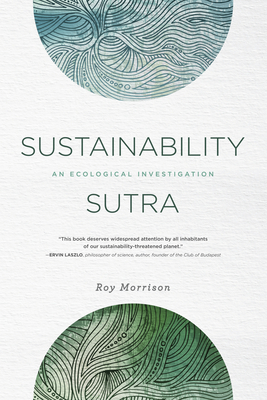 Sustainability Sutra addresses the pursuit of sustainability as crucial in the transformation from an industrial to an ecological civilization, exploring in succinct detail how sustainability can be accomplished through an ecological global growth strategy that makes economic growth mean ecological improvement. It is a meditative journey of self-discovery. It is a path and record of a writer's and reader's heart way.  The book includes an Introduction that considers the dynamics of building an ecological future in market economies and examines how the price system can send clear signals for sustainability. Combining ecological consumption taxation, new market rules, fiscal, monetary and investment  can catalyze the trillions of dollars of productive investment in a sustainable future.

"The Planet’s fever is rising. Many major human activities rapidly destroy the livelihoods of humankind. As a result of global warming as well as air, water and soil pollution and increasing weather extremes, millions of animal and plant species are becoming extinct. Accelerated by terrorism and war, the lives of human beings are put into question. How to combat global warming? Sustainability in the ecological, social and economic spheres is crucial. To achieve sustainable economy, cultural and religious behaviour must change, to save the humanity. Peace, social justice, democracy and ecological economy are the key points. The book by Roy Morrison, Sustainability Sutra elaborates on solutions in economy and society. Sustainable economy comes with zero emission technologies and carbon sinking agriculture. The target must be global cooling, instead of accepting global warming. This stimulates an end of live-endangering toxic emissions from fossil fuels, nuclear energy and chemistry, from toxic pesticide agriculture on the one hand. On the other hand, it enables millions of new jobs and fighting against poverty and hunger, which are the source of conflicts and terrorism. Sustainability Sutra is a great contribution to a discussion on how to stop and reduce the planet’s fever." — Hans-Josef Fell, Member of the German parliament (1998-2013) President of the Energy Watch Group Author of Global Cooling

Roy Morrison is a writer and energy consultant with over 30 years of diverse experience. He has extensive experience in energy efficiency work, performing energy audits and technical assistance analysis for business, institutional, and government clients. He was the author of the first law in the nation for municipal aggregation for retail electric competition. He also founded the New Hampshire Consumers Utility Cooperative that was the first seller of competitive electricity in New Hampshire. He was a founding staff member of the University of New Hampshire Energy Office.

He is currently working on building solar farms in several states with a focus on using roof tops and marginal and contaminated land to be restored for productive energy use. He pursues a variety of sustainability initiatives, including  zero carbon planning and greenhouse gas mitigation and adaptation planning for New England towns and cities.

He was Founding Director of the Office for Sustainability at Southern New Hampshire University. He has worked on the development of renewable energy hedges; Advanced Energy Performance Contracting for market based mass retrofits of efficiency and renewables;  and  Super Grid development.  He was an organizer and safe energy activist with the Clamshell Alliance in the 1970s and 1980s, co-founder of the American Peace Test, and staff for the Nuclear Freeze Campaign in the 1980s. He helped organize and participated in many large and small non-violent direct actions and risked arrest many times in support of safe energy and nuclear disarmament, and in opposition to nuclear power and nuclear weapons testing.

He is the author of numerous books including Mondragon: A Cooperative Social System; Ecological Democracy, Ecological Investigations; Ecological Civilization 2140; and the poetry book The Loggers of Warner.