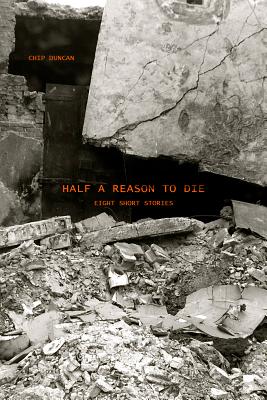 Half a Reason to Die (Paperback)

Half a Reason to Die is a collection of eight original short stories based on real life events in the author’s life as a writer and documentary filmmaker. The stories span the globe, from a military doctor in Afghanistan to a homeless Vietnam vet. First person narratives supplied by storytellers with journalistic backgrounds provide a unifying thread that runs throughout the collection.

Chip Duncan is a writer and documentary filmmaker with a penchant for overseas assignments. His professional journeys have taken him to many extraordinary places including Afghanistan, Bhutan, Ethiopia, Sudan, and Myanmar. His previous work includes Enough to Go Around: Searching for Hope in Afghanistan, Pakistan, & Darfur and The Magic Never Ends: The Life and Work of C. S. Lewis, as well as numerous films broadcast worldwide.

Chip Duncan is a filmmaker, author, photographer and President of The Duncan Group, Inc., a documentary production company formed in 1984.
Duncan and his team recently completed the three-part public television series The Reagan Presidency (broadcast internationally in 2013). Interviews include Condoleezza Rice, Douglas Brinkley, Oscar Arias, Sandra Day O’Connor, Walter Mondale, George Shultz, Paul Volcker, Henry Cisneros, Robert Reich, Reza Aslan, Richard Reeves, Trita Parsi and Andrew Young... among others.
The classroom component of Duncan's climate change series The Life & Death of Glaciers was released to schools across North America in September, 2011 by Discovery Education. The feature documentary is currently in production with an estimated airdate of late 2014.
Other notable productions include the 2009 PBS Special Landslide: The Presidency of Herbert Hoover and the 2-part public television documentary A History of Prayer In America. The PBS Special In a Just World – Contraception, Abortion & World Religion aired nationwide in 2003. The national release of Cost of Freedom – Security, Civil Liberty & the USA Patriot Act premiered that same year. The Magic Never Ends – The Life & Work of C.S. Lewis aired nationwide on public television during 2002. Duncan’s production of the 13-part Discovery Networks series Mystic Lands was broadcast in more than 140 countries around the world during 1996.
During May, 2012 Duncan documented health care conditions in the Irrawaddy Delta region of Burma for Relief International. Later in 2012, Duncan documented several carbon-reducing development programs for Relief International in Ghana. During two trips to Afghanistan since the U.S. led invasion, Duncan has documented various parts of Afghanistan including the Bamyan and Panjshir provinces. During 2005, he drove more than 1800 kilometers of the Afghan countryside documenting the efforts of Save The Children. Duncan documented relief efforts in Darfur, Sudan during 2008 and he was part of the first response to the Haitian earthquake during 2010.
Duncan's photographic images appear in the book Enough To Go Around – Searching for Hope in Afghanistan, Pakistan & Darfur (Select Books, NYC, 2009). A photographic exhibition of Duncan's images from Afghanistan premiered during August, 2011 at the World Peace Festival in Berlin, Germany. A second photographic exhibition featuring images from Afghanistan, Pakistan and Darfur, Sudan premiered during September at the O Street Museum in Washington D.C.
Duncan has filmed in more than forty countries. His documentary television specials and series have won more than 125 national and international awards. Broadcast networks include PBS, HBO, Discovery, TLC, Showtime, Lifetime and Sundance Channel... among others.