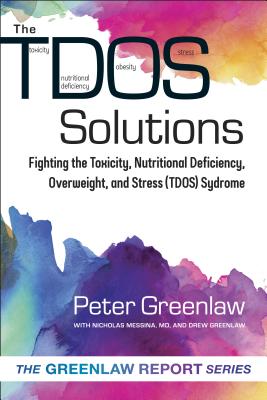 For over a decade health and wellness expert, Peter Greenlaw, has studied the top researchers. His review of research looked at the effects on human health of environmental toxins, nutritional deficiency, overweight, and stress. Now he connects the dots showing how the interconnections are amplifying these four health-robbing co-factors—Toxicity, Deficiency, Overweight, Stress—into a deadly syndrome that’s killing us.

How can the human race absorb and process over 700 tons of toxins from the air we breathe every day?

What happens as we consume hormones, steroids, pesticides, antibiotics and birth control chemicals in every glass of water?

Why are there 275 lethal toxins found in newborn babies? And girls as young as three are showing signs of puberty?

Connect the dots to see how toxins + depleted nutrients + overweight + stress adds up to the perfect storm that's costing us our health.

Until Peter Greenlaw, the “researcher on researchers,” connected the dots, no one acknowledged the big picture...and sounded the alarm. Now, the facts are clear. The entire spectrum of research tells a bigger health story than we’ve been led to believe. Disregard these facts at your peril.

Peter Greenlaw has gained enormous support from top experts and authorities across the health and medical global community because he has dedicated his life to trying to answer the real questions.

“Unless we can get enough of the right nutrition back into our bodies to fight this four-headed monster, we and our families will become weaker, sicker and die much earlier than anyone ever thought possible.”—Peter Greenlaw

Peter Greenlaw has conducted more than 1,500 lectures around the world on health topics and the ideas he presents in this book. He has been the featured speaker at the AutismOne conferences in 2014 and 2015, a frequent speaker at the CEO Club of New York City, and a guest on many television programs in such cities as Washington, D.C., Los Angeles, San Francisco, Portland, and Kansas City. On Greenlaw’s own TV show, “The New Health Conversation,” on Rocky Mountain PBS, he presents a fresh approach to health, diet, nutrition, and TDOS. Greenlaw is a featured speaker with Celebrity Speakers Entertainment, and he will be the central figure in an upcoming television pilot being filmed by award-winning director Douglas Freel, titled What if you didn’t know?™
or
Not Currently Available for Direct Purchase
Copyright © 2020 American Booksellers Association