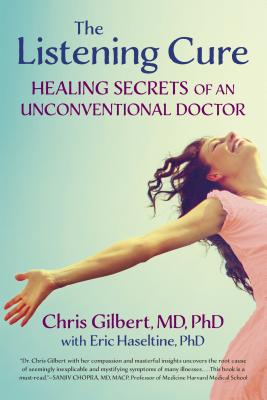 Healing Secrets of an Unconventional Doctor

This book is about new and effective ways to address disease that aren’t commonly used by our physicians. Dr. Chris Gilbert demonstrates that our bodies speak to us all the time. Through symptoms such as fatigue, joint pain, abdominal pain, anxiety, depression, and other symptoms, our bodies let us know that we have a problem and that we need to solve it. Dr. Gilbert, assisted by Dr. Haseltine, shows that by using her “giving the body a voice” technique, sufferers can discover what the symptoms mean and how to fix the often hidden reasons for their health problems.Each chapter reveals a different way of identifying underlying issues. These original, simple, and fun techniques include role-playing, inner group therapy, dream interpretation, art interpretation, nature walks, and even conversations with death. The Listening Cure covers a range of common afflictions, from obesity to back pain, and devotes a full chapter to resolving sexual problems in relationships.By listening to what our bodies have to say, Dr. Gilbert shows how to achieve long term deep cures versus temporary superficial fixes. Her secrets will become your secrets.

Dr. Chris Gilbert is an Integrative and Holistic Medicine physician MD, PhD, now focusing mostly on public speaking. For fifteen years, she was in private practice in California, specializing in the combination of Western and Eastern Medicine and dedicating her life to treating and curing symptoms and illnesses that other physicians haven’t been able to address. She is known for her exceptional success in treating chronic fatigue syndrome, anxiety, depression, recurrent infections, lower back pain, sexual problems, unexplained abdominal pain, and arthritis through methods she pioneered (described in detail in this book). Before establishing her private practice, Dr. Gilbert worked with Doctors Without Borders and treated a staggering variety of illness suffered by poor and displaced people around the world. She has worked with patients in Mozambique (a pediatric hospi- tal during a civil war), Sri Lanka (28,000 refugees in the north of the Island during a civil war), Mauritania (Touareg refugee camp at the border of Mali) and China (400,000 people displaced by floods). She is an active member of Doctors Without Borders. Prior to those assignments, she was in a private medical practice in Paris, France, for seven years. Dr. Gilbert holds a General Medicine MD and PhD from Cochin Medical School in Paris, France, and certifications in Hyperbaric Medicine, Sexology, Acupuncture, and Homeopathy. She is licensed in California, interned at University of California, Irvine, and served her residency at Harbor-UCLA Medical Center. She serves at times as a medical adviser for TV shows such as CSY NY. In 2010 she self-published two books that she sold to her patients: Dr. Chris’s A, B, C’s of Health and The French Stethoscope (a memoir). She is a co-blogger with her husband Dr. Haseltine, on PsychologyToday.com

Eric Haseltine is a neuroscientist with over thirty years experience applying advances in brain research to everyday problems. He has used his skills in fields as diverse as brain research, aerospace, entertainment, and national security. He holds a PhD in Physiological Psychology from Indiana University and completed postdoctoral training in Neuroanatomy at Vanderbilt Medical School. His current research focuses on mind-body interactions. He has written over one hundred articles on the brain for Discover magazine and Discovermagazine.com as well as sixty-five articles on applied neuroscience at PsychologyToday.com. Haseltine drew on his training as a brain scientist to author or coauthor twenty-one issued patents and twenty-three pending patents. In his 2010 book Long Fuse Big Bang, Dr. Haseltine showed how to apply principles of neuroscience to accelerating innovation. He served as the head of Research and Development at both The Walt Disney Company and The National Security Agency. In his last government post from 2005-2007, he was the Director of Science and Technology for the entire U.S. Intelligence community.
Loading...
or
Not Currently Available for Direct Purchase