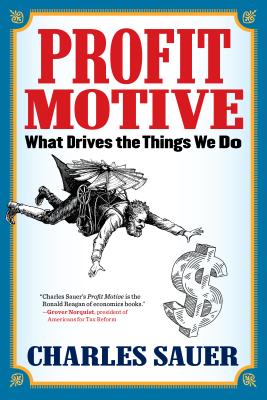 What Drives the Things We Do

Most businesses are driven to maximize profit, but what does this drive really mean in action? In Profit Motive: What Drives the Things We Do economist Charles Sauer makes the case that identifying your own and others’ “Profit Motives” provides the foundation for running a successful business, being an effective leader, a good consumer, and getting what you really want out of life. In this highly praised new treatise on economic behavior, Sauer examines how businesses make decisions in pricing and employment and how the search for long-term profit can mean adopting practices that may seem contrary to fundamental capitalist principles. But the Profit Motive analysis goes well beyond the realm of finance and corporate decision-making to explain how gaining a profit, or a benefit, is the motivating force behind an endless array of choices made by everyone from large organizations to individuals and their families?and everything in between.

Charles Sauer is an economist and policy specialist. He has spent time on Capitol Hill working for the Chairman of the Finance Committee; he has worked for a Governor on tax, immigration, and labor issues; and was Deputy Legislative Director for an academic think tank focusing on tax, finance, and healthcare. On the Hill he is known for developing free market solutions and effective legislative coalitions. Charles runs the Market Institute, is a founder of the Savings and Retirement Foundation, Co-Director of the Inventor’s Project, and host of the Prosperity Caucus. Charles is a Weekly Standard contributor and has written for Forbes, Investor’s Business Daily, Entpreneur.com, The Washington Times, The Daily Caller, and numerous other publications. Additionally, Charles Sauer appears weekly on both One America News as well as the Big Picture with Thom Hartmann.

Praise For Profit Motive: What Drives the Things We Do…

“What Charles is talking about in this book, Profit Motive, is how to work smart. That is a pretty good start to making your first billion.” — T. Boone Pickens, Founder, Chairman and CEO at BP Capital and TBP Investments Management, and author of New York Times best seller The First Billion Is the Hardest

“Profit Motive is a must-read book that guides readers through one of the most fundamental foundations of leadership—understanding the motivations driving the world around us.” — Governor Jeb Bush

“Profit Motive is a must-read for someone on both the political right and left. On the left, we need to understand how a radical like Charles Sauer views the world, and on the right . . . well you all can do what you want.” — Thom Hartmann, nationally syndicated radio show host Four-time winner of Project-Censored award, New York Times best-selling author